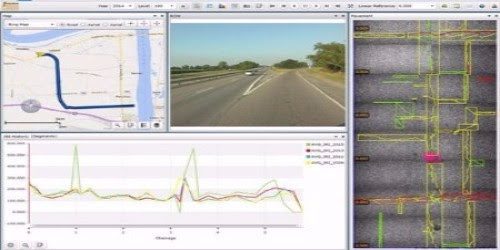 “A great deal of New Orleans was under water for a long time,” says Jason Chapman of LaDOTD’s Data Collection & Management Systems group. “The sub-base may have been weakened or washed away in places. There were also concerns that pavement deterioration was worsened by heavy vehicles pounding roads while they were still wet.” Highways in southwest Louisiana sustained similar damage.

This left asset managers and highway engineers with challenging questions: Which sections of road had been affected, to what extent, and which were priorities for funding and treatment? Fortunately, they had a head start.

Long before the Moving Ahead for Progress in the 21st Century Act (MAP-21) required states to provide a linear reference system (LRS) for public roads, the agency was harnessing condition data for state and federal roads. The LRS maps roadside inventory and assets such as streetlights and signs in relation to the highway.
Since 1995, the agency has retained Fugro Roadware, an asset-management solutions provider based in Mississauga, Ontario, Canada, to collect values for condition indicators such as cracking, patching, roughness, rutting, and surface texture, as well as right-of-way (ROW) photolog.

Fugro collects data via Automatic Road Analyzer (ARAN) vehicles that can measure more than 15 data streams continuously in a single pass at traffic speeds. Clients can buy and use one of three models or, like LaDOTD, contract with Fugro on a mileage-collected basis.

All 35,800 miles of state routes are assessed every other year; 5,700 National Highway System miles in Louisiana are assessed annually. Data from the nine LaDOTD districts is housed in a central database called the Pavement Management System (PMS).

In addition to aggregating the data into an overall condition score, the agency has an index for each distress value. Quality control and quality assurance (QC/QA) standards ensured consistent data entry, and district employees were sharing analyses with headquarters via Fugro’s reporting software, called Vision, and iVision web-based viewing software. By 2005, the agency was using the data to evaluate, plan, cost, and design maintenance interventions.

“It drives our analyses, ensuring we’re optimizing project selection by doing the right treatment at the right time,” says pavement management engineer Christophe Fillastre. “It helps to justify preservation over ‘worst first’ projects.” So when the hurricanes hit that year, the agency already had extremely accurate condition benchmarks and historical deterioration rates. These provided the baseline for evaluating the damage and justifying both short- and long-term funding requests. Once flooding receded, gathering current condition data became the priority.

The agency renewed its relationship with Fugro with a year-long contract to collect and fast-track supplementary data that would help employees better assess damage and the future risk of damage caused by the flooding: GPS and elevation data, videolog, friction testing, and geometric data (cross-fall, grade, horizontal and vertical curvature, edge drop-off heights).

To determine subsurface conditions in three districts where asphalt pavement was most distressed, the agency also requested, for the first time, ground penetrating radar (GPR). GPR is particularly sensitive to moisture, so it picks up anomalous reflection activity within layers and at layer boundaries that indicate mixture stripping or moisture infiltration into debonded areas.

“In one district, we had one data point before the storms showing distress values and rates of deterioration and two data points after,” says Fillastre. “Together with the GPR, this allowed us to determine if and where distress values were greater and locations that required emergency attention.”

The technology also clarified the hurricanes’ deeper impact. In some places, pavement life fell from 25 to 15 years.The agency also differentiated between water damage and debris damage. First, the agency identified the sections made worse by the storm. Then employees sat down with

The agency also differentiated between water damage and debris damage. First, the agency identified the sections made worse by the storm. Then employees sat down with district and federal highway engineers and reviewed each section using the agency’s pre-storm video and post-storm photos of the debris removal.“This helped us decide whether the damage was due to floodwaters or debris so that we could agree on funding responsibility,” says Fillastre.

While GPR helped to plan repairs, it was being combined with road geometry data and other condition data to mitigate future risk. “To manage evacuation more efficiently, we wanted elevation data to assess which areas are likely to flood first,” says Chapman from the agency’s Data Collection & Management Systems group. “That data also helps the districts understand what sections may need to be raised and watch for potential issues such as subsidence.”

The thinking ties in with the agency’s overall post-Katrina goal to have better visibility of state highways to improve emergency response. This led to implementing centralized traffic control that gives drivers live information on highways and diversion routes. “GPR improves our modelling,” Chapman says. “We can look at the curves, forecast maintenance, and spot changes with or without a catastrophic event.”

The agency reviews deterioration curves every 18 months to create a new project list. Headquarters recommends projects backed by data that would justify funding requests, but district engineers make their own choices. Having a deterioration index means engineers can spot deviations in patterns and validate the need for intervention before problems require more serious treatment.

GPR also helps with replacement projects.“We can pull up the GPR data, cross-reference the relevant core, and use them for design and construction,” says Fillastre. GPR is now a standard item in the agency’s Fugro contract. Data is collected every six to 10 years.

Fugro shares the agency’s commitment to doing whatever it takes to ensure data is consistent and accurate. Detailed procedures, thresholds, and parameters are in place, and the partners apply continual improvement techniques to the QC/QA process. Their work is an example of best practices among North American DOTs. “Otherwise, you defeat the purpose of data collection,” says Chapman. “We set high expectations and take pride in the quality of our data sets across three cycles. It ensures you’re not dealing with issues after the fact and that no poor decisions are made once data is loaded. “It also builds trust in the integrity of the intelligence,” he says. “Nobody’s coming back to query the ratings.”

Fugro’s iVision website facilitates information-sharing agencywide. The web-view can overlay color-coded distress for the latest year of collection and graph multiple years of distress data on line or bar graphs. Data can be cross-referenced with corresponding video of defects such as surface cracking. The agency now wants to develop five-to-10-year budget forecasts based on the data, a goal that illustrates the far-reaching returns possible from having holistic condition data.

In addition to eliminating potential duplication of effort by nine districts, centralizing data makes it easy to cost-effectively integrate new information. As Fugro’s ARAN platform has evolved, the agency’s been able to add new and more-detailed data streams. Collection from the same platform ensures that all data streams are fully synchronized onboard and conform to the same quality control. A 2012 FHWA memo allowed state DOTs to spend State Planning and Research (SP&R) funds, without match, for this purpose. The waiver was in place for fiscal years 2013-15.

LaDOTD used its allocation to collect data on 120,000 miles of city and county roads and turn the PMS into an Enterprise LRS. In addition to a high-definition photolog providing a 360-degree view of the highway, the agency’s latest Fugro contract includes GPS and elevation data, road geometrics, lengths, alignments, and features that can improve safety. Fugro uses its proprietary Surveyor software to extract required Highway Performance Monitoring System (HPMS) asset data such as number of lanes, posted speed limit, toll type, shoulders, widths, median type, sections with toll charge, and HOV lane type. Landmarks like churches, courthouses, cemeteries, fire stations, and schools are also being mapped. Agency employees use Surveyor to extract these other asset types using the ROW photos. “We saw the need to clean up our basemap data early on,” says Chapman. “We were picking up power lines, trails, and private roads with previous mapping, and needed eyes on the road to help.”

By analyzing attributes, such as the narrowing of a road or school location, the agency can use data to inform emergency planning and prioritize safety improvements. “In implementing an Enterprise LRS, we’re using advancements in GIS technology and software to manage our inventory of roadways and attributes,” Chapman says. “With this in place, other geospatial data can be referenced to a consistent basemap.” The agency’s ultimate goal is to create an easy-to-use data clearinghouse so that ‘on the fly’ reporting can be done in a browser-based environment via GIS webpages. To do this, the agency is migrating to Fugro’s web-based iVision application.

“We want to make viewing more intuitive, so you can pull up different data layers, such as traffic flow, for any location instead of looking up separate tables,” Chapman says. “It’ll make it simpler to use and more efficient, and users will need less interpretation support. QA/QC processes also benefit because we can check things faster with web-based software.”

The goal is to roll out iVision to district offices and then cities and counties.

“Municipalities will be able to submit their own edits, making it even more useful for them,” says Chapman.