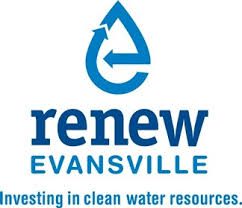 Under the terms of the agreement, Evansville will spend $729 million over 24 ½ years to significantly upgrade the city’s sewer system infrastructure, improve operations and dramatically reduce water pollution to comply with the Clean Water Act. EWSU must reduce the number of combined sewer overflow (CSO) events – wastewater that overflows into the Ohio River and Pigeon Creek during weather events – to no more than four per year.

“After years of negotiation, we’ve reached an agreement that’s great for our environment and less financially burdensome to the residents of Evansville than what the federal government proposed,” Mayor Lloyd Winnecke said. “Renew Evansville will be the largest infrastructure project in the city’s history, and EWSU Director Allen Mounts and his team worked tirelessly to develop a plan that modernizes and expands our sewer system while keeping rates more affordable for the Utility’s customers.”

Significance of the negotiated plan

Under the new terms, 98 percent of the sewage overflow that currently goes into the Ohio River will be captured, allowing Evansville to comply with the Clean Water Act. Additionally, EWSU will create one of the largest wetland treatment systems in the U.S., replacing Bee Slough with a sustainable, green infrastructure solution. Other upgrades include the addition of several storage facilities, improvements to the wastewater treatment facilities, and the separation of combined stormwater and sanitary sewers.

EWSU’s 24 ½-year timespan is different from most U.S. cities’ 20-year plans. The extended time limit was negotiated to allow the city more time to fund the planned projects and reduce the rate increases which would have been greater throughout a 20-year period.

“Some cities are struggling to honor the terms of their federally mandated Consent Decrees, and we’re thankful that EPA worked with us to develop a mutually beneficial plan,” Mayor Winnecke added. “Our diligent negotiations ensure Renew Evansville will be successful.”

In May 2013, Evansville submitted its proposed IOCP, which outlined a 28-year, $540 million program that would capture 92 percent of wet weather flow in the combined sewer system, with no more than 12 overflow events a year.

In June 2014, the EPA and state officials disapproved the proposed plan and listed nine objections. EPA outlined a more costly solution spanning 20 years, which would have been nearly $200 million more expensive than the approved $729 million plan.

On December 16, 2015, the current agreement was reached by all parties and was subject to formal approvals. The Amended Consent Decree was filed in federal court February 18, 2016.

Although the Amended Consent Decree was just filed, EWSU has moved forward with implementing several aspects of Renew Evansville. Clear Path, one of the most aggressive deliverables, includes the inspection and cleaning of all small-diameter sewer lines in the City’s system by Nov. 1, 2017.

“Even though we only recently reached an agreement with EPA, we’ve been implementing the deliverables since May 2013,” said Mounts. “We will work to finalize our plan and timeline, and expect to break ground on our first construction projects in Summer 2016.

Developed by the Evansville Water and Sewer Utility and a team of engineers, Renew Evansville is a proposed 24 ½ -year, $729 million program which will significantly upgrade Evansville’s sewer system infrastructure, improve operations and reduce water pollution as outlined in Section 402(a) of the Clean Water Act enforced by the U.S. Environmental Protection Agency and Indiana Department of Environmental Management. Renew Evansville projects will address combined sewer overflows, and overflows and backups in the separate sanitary sewer system. Visit RenewEvansville.com to learn more about Evansville’s largest long-term capital improvement project.