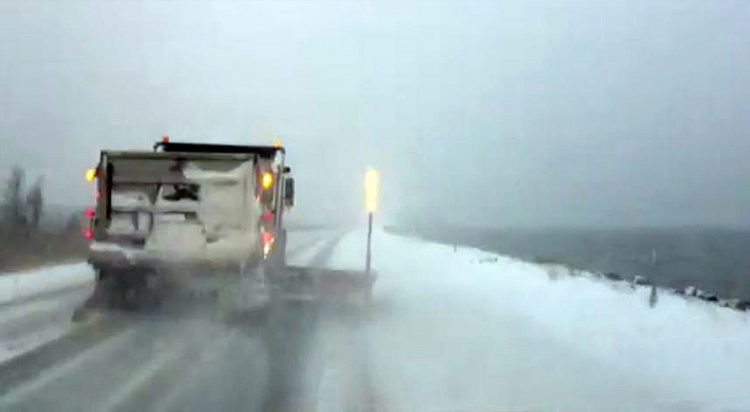 Feb. 25, 2016—As wing plows become more widely used in the Upper Peninsula, the Michigan Department of Transportation (MDOT) is using a simple innovation to make them more visible to motorists.

Wing plows, typically deployed on the right side of a standard plow truck, extend the plow’s reach and allow a driver to clear about 14 feet in one pass instead of 9-10 feet. Using the wing plow, crews can clear the entire travel lane and a portion of the shoulder in one pass, thus reducing the number of passes needed to clear the road during and after a winter snow event. This improves service while reducing labor, equipment and fuel costs.

Last winter, MDOT’s U.P. plowing fleet began using wing plows to clear active lanes of traffic, as well as shoulders. The Marquette County Road Commission also has been approved to use wing plows on state routes. When the wing is deployed, motorists will be alerted by additional flashing lights mounted over the wing plow.

The existing lighting systems available for wing plows had their own hydraulic systems to extend them from the body of the truck. While these systems worked well, they required added hydraulics and moving parts, which added expense and required more maintenance. A new, more foolproof wing plow lighting system, dubbed the “Superior Stick,” was recently developed by Tom Deschaine and Jason Rinkinen, state workers at MDOT’s L’Anse Maintenance Facility.

The stick attaches directly to the end of the plow and has no moving parts. It extends and retracts along with the wing plow blade to make the warning lighting highly visible and reliable. The lighting increases motorist safety and allows the deployment of the wing plow in a wider variety of situations. The system saw its first use last winter in MDOT’s Superior Region – which encompasses the entire U.P.

L’Anse Maintenance Supervisor John Dault, who has made presentations on the Superior Stick at several MDOT conferences, said the lighting system is a great example of an innovation to help maintenance crews increase efficiency.

“We have this innovative wing plow but, where we needed it, we had a lot of intersections, passing relief lanes and business entrances where we couldn’t use it,” he said. “This light makes the wing plow acceptable. We’ve innovated a feature that really works.”

Motorists in Baraga, Mackinac and Houghton counties may have seen wing plows with the new lighting systems clearing active lanes of traffic on state highways this winter. Currently, all MDOT trucks with wing plows in the Superior Region are using the new lighting stick.

MDOT’s Engineer of Operations Field Services Mark Geib said that, statewide, the Kalkaska Garage near Traverse City, along with garages in southwest Michigan and the Lansing/Ann Arbor area, have outfitted a small number of wing plow-equipped trucks with the new light sticks.

“When the results and feedback are in from more extended use in Superior Region, then I anticipate greater use,” Geib said.

The first Superior Sticks were built by MDOT’s L’anse Garage staff partly with repurposed spare materials. Since then, a small machining and fabricating company, Johnson & Berry Manufacturing in L’Anse, has produced some of the sticks, and MDOT will share the original concept with any other manufacturers interested in building them.

Motorists should never attempt to pass a moving snowplow on the right whether a wing plow is being used or not. It’s illegal and dangerous. However, new lighting systems like the Superior Stick make the wing plow much more visible.