/ Corporate / Looking to Sustainable Cities as Key to Smart Future

Looking to Sustainable Cities as Key to Smart Future 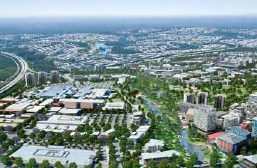 The world is entering an age of urbanization. Every year more people relocate to cities, creating new challenges around affordable housing, transport congestion, access to jobs and environmental impacts.

Even though Australia is the planet’s sixth largest country by land area, two-thirds of its population is concentrated in four prosperous metropolitan regions: Sydney, Melbourne, South-East Queensland and Perth. Australia’s population grew by 30 percent in the last 20 years. The four major regions accounted for 77 percent of this growth, chiefly due to the availability of more employment opportunities. This trend shows no sign of abating as the majority of new jobs will continue to be in these locations.

Cardno Asia Pacific Planning Discipline Chair Jeff Humphreys says planners and decision-makers must adopt a long-term, integrated approach to urban solutions. This is the only way to ensure sustainable communities and high living standards for the future. As a diverse professional services company, Cardno assists clients to confront and take advantage of the challenges and opportunities of incorporating urban sustainability principles into their projects and strategies.

A central focus of metropolitan planning is to provide for efficient travel between where people live and where they work. This issue is becoming an even greater challenge than in the past, with employment growth concentrated towards the center of metropolitan regions, while the majority of residential growth is still occurring towards the fringe.

“A key task in the major Australian cities is to transport large numbers of workers quickly, comfortably and energy -efficiently,” Jeff says. “Greenfield residential development in the outer suburbs needs access to high quality public transport to the center of the metro area that is fast, frequent, and has good station facilities and secondary public transport connections. This will enable people living in the outer suburbs to have access to the best-paid and most numerous jobs, while also allowing enterprises located in the center of the region to have access to the deepest pools of skilled labor.”

Road systems need to be improved, but rail-based transit will best serve the central hub, as long as the distribution of jobs remain reasonably well concentrated and related to the transit system.

“By 2050, Australia’s major city regions may be beginning to assume the dimensions of London and Paris today, in terms of population and job numbers, and perhaps the transit systems of those cities, including their metro networks and
light rail, loosely provide examples of how people might get to work,” Jeff says.

A major opportunity for the strategic development of Australia’s major urban areas is the conversion of brownfields sites, redeveloping obsolete industrial and commercial sites to meet contemporary needs, such as for high density residential apartments.

Cardno has extensive experience in brownfield remediation in the United States and is now able to apply these skills across a range of urban projects in Australia. However, sustainable metropolitan development will only occur if all levels of government and industry pledge to develop a culture where the community has good understanding of what is happening and the trade-offs that need to be made, Jeff says.

“Transparent planning and informed engagement is essential and this relies on good communication,” he points out. “All
stakeholders need to collaborate about how best to achieve a desirable future with everyone recognizing the role that each has to play.”

The right balance must be struck between developing for the future and preserving important parts of Australia’s built heritage that provides diversity and reminds us of our history.

“We need to understand what needs to be kept and how, if appropriate, it can be adapted acceptably and imaginatively to contribute positively to a future city,” Jeff says. “In some cases, whole districts will need to be conserved, because they are valued for their significant heritage value or character and provide relief from continuous modern development. It will be a matter for ongoing discussion to resolve the balance.”

City planning also needs to continually assess the implications and opportunities brought by new technologies. New tools will enable smaller-scale and more efficient infrastructure solutions than in the recent past, with accompanying reductions in the ecological footprint of cities. Despite the many challenges, Jeff believes the major Australian cities are well-placed to respond to a changing world economy, with established, vibrant CBDs and public transport systems focused on these central areas.

“While we value our built heritage, we are fortunate our city centers are not so full of it that they cannot be adapted to modern needs,” he says. “This is a problem for many European cities such as Paris, which have found it difficult to accommodate modern business functions in the traditional city heart.”

For the foreseeable future, Sydney, Melbourne, South-East Queensland and Perth will continue to attract Australia’s most talented workers and provide much of the country’s innovation and economic growth. If done carefully and strategically, how these cities are designed, constructed and serviced could provide a workable template for meeting the increasingly complex challenges of sustainable urbanization across the world.

Cardno was engaged to provide urban design and statutory planning services to create a model transit-oriented
development activity centre for a new regional center in the Perth suburb of Cockburn. Cardno worked collaboratively
with the client, local government, and the community, to prepare structure plans for both Cockburn Central Town Center and Cockburn Central West. Cockburn Central West will also accommodate a major integrated recreation facility.

Lakeside is a 3,000-lot residential community in the Melbourne suburb of Pakenham. The development includes a range of housing types, a number of commercial precincts, schools and sporting facilities, and provision for a future railway station. Other features include a recreational lake and three major constructed wetlands systems. Cardno provided civil and traffic engineering services for the development from initial feasibility investigation and master planning, through to the design and documentation, and construction delivery of all urban infrastructure.

Marsden Park is a 164-hectare residential development located in Blacktown, western Sydney. Cardno is responsible for delivering the first 400 lots of this 2,400-lot residential community, including project management and design of all estate major works, covering major lead-in utilities (water, sewer, electricity, NBN and natural gas). Cardno was involved in the strategic planning for Stage 1, including the provision of permanent and temporary detention basins, open space design and the coordination and provision of the cycle network.

Cardno has helped design and build a city that is now home to nearly 32,000 residents across six suburbs, with planning
well advanced to support a population of 86,000 by 2030 with a maximum capacity of 105,000 residents. The company
has worked on numerous projects over the past ten years, providing a range of urban development, traffic and transport, buildings, infrastructure and water and wastewater services.