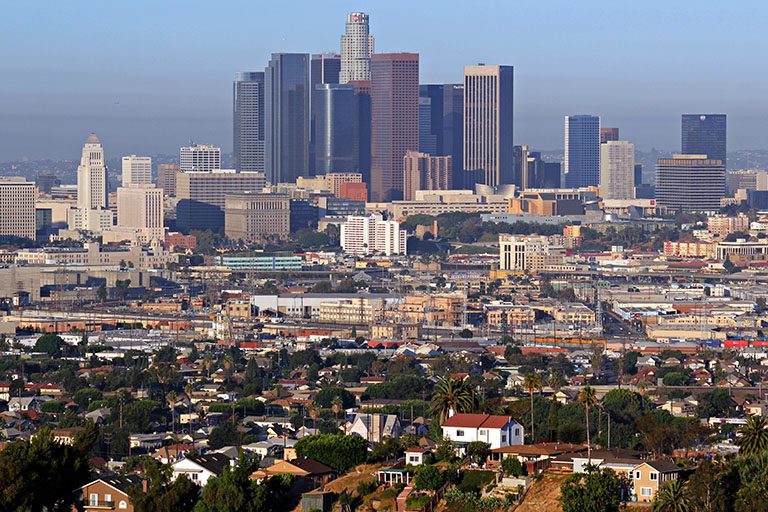 Irvine, Calif., Feb. 24, 2016 – Hundreds of methane-emitting hot spots have been identified across the Los Angeles Basin, including a “clean ports” truck refueling facility near the Port of Long Beach, power plants, water treatment facilities, and cattle in Chino, according to new findings by the University of California, Irvine.

Atmospheric scientists conducted a mobile survey across Los Angeles, Orange and Riverside counties, and their results, published this week in the Journal of Geophysical Research: Atmospheres, identify the region’s highest emitters. Methane is the second-largest known contributor to global climate change, behind carbon dioxide.

The survey was done before the Aliso Canyon gas well leak temporarily displaced thousands from their Porter Ranch homes. The findings could be used by the Southern California Gas Co. to meet orders by Gov. Jerry Brown and the state Air Resources Board to offset the gas leak by removing as much of the fast-acting greenhouse gas from the air as was emitted from the Aliso Canyon site, the researchers said.

Lead author Francesca Hopkins said the survey “identified numerous methane hot spots that could be targets for these mitigation activities.”

The researchers drove a specially equipped cargo van for hundreds of miles throughout the Los Angeles region, taking readings with instruments designed to measure methane, ethane, carbon monoxide and carbon dioxide. They observed heightened methane levels across the basin and pinpointed 213 hot spots.

“Our surveys demonstrate the prevalence of unwanted methane emissions across the Los Angeles urban landscape and show that two-thirds of the gas comes from fossil fuel origins,” said Hopkins, who began the work as a postdoctoral scholar at UCI. “Known sources of methane include cattle, geologic seeps, landfills and compressed natural gas fueling stations.”

Now an environmental scientist at the Jet Propulsion Laboratory in Pasadena, she said that while the recent leak in Aliso Canyon drew a lot of media and public attention, the leaks her team detected during the survey contribute to an ever-present dome of methane that hovers over the region.

A key factor in the scientists’ ability to create such a detailed map of emissions was their decision to collect surface samples from a roving vehicle. Equipped with a modified electrical system, a GPS, a rooftop sampling mast and spectrometers, the cargo van enabled them to continuously sample and analyze air wherever they went.

“Mobile measurements are really important because you can examine the fine-scale structure of variations in methane within neighborhoods and begin to identify the origins,” said Jim Randerson, UCI Chancellor’s Professor of Earth system science and principal investigator on the study. “It’s often not possible to pinpoint individual sources with aircraft observations.”

He added: “This work shows that small natural gas leaks are ubiquitous throughout the Los Angeles Basin. A critical next step is to develop a regional partnership with stakeholders to identify the source of these leaks and make a plan for fixing them.”

“I’m often asked about the prevalence of major methane point sources in cities,” said Riley Duren of JPL’s Megacities Carbon Project. “The answer is [that] we really don’t know at the moment, except in a handful of places where direct measurements are being made. Studies like this are helping us gain a much clearer understanding of the problem.”

The survey was a collaboration among UCI, the University of Utah and San Diego State University and was funded by the U.S. Department of Energy Office of Science.

About the University of California, Irvine: Currently celebrating its 50th anniversary, UCI is the youngest member of the prestigious Association of American Universities. The campus has produced three Nobel laureates and is known for its academic achievement, premier research, innovation and anteater mascot. Led by Chancellor Howard Gillman, UCI has more than 30,000 students and offers 192 degree programs. It’s located in one of the world’s safest and most economically vibrant communities and is Orange County’s second-largest employer, contributing $4.8 billion annually to the local economy. For more on UCI, visitwww.uci.edu.