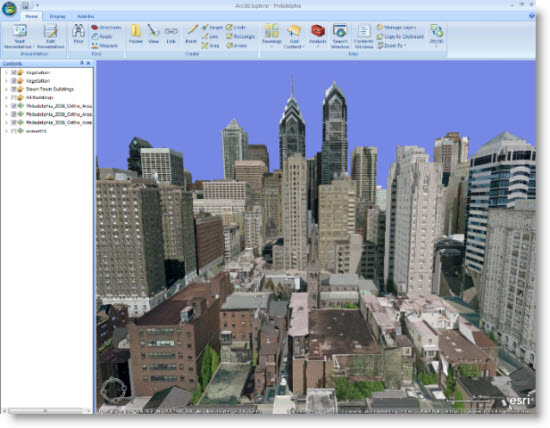 “For CityEngine 2012, we focused on improving the key workflows in GIS, urban planning, and entertainment production,” says Pascal Mueller, director of Esri R&D Center Zurich. “We developed new tools for the 3D editing of buildings, introduced 3D zoning techniques for better urban design, and made CityEngine fully compatible with ArcGIS.”

Sharing 3D city models is also easier than ever via the new CityEngine 3D Web Viewer. Three-dimensional models can now be exported as URLs that display in a browser-based viewer. This greatly expands CityEngine sharing capability because scenes can be opened independent of CityEngine on any Internet-accessible device.

“Smart cities of the future will be designed more transparently, and the design process will engage citizens,” says Esri president Jack Dangermond. “With CityEngine 2012, smart city scenes can be published directly on ArcGIS Online for sharing new developments, design proposals, and before-and-after-comparisons with nontechnical decision makers and the public.”

CityEngine is available for the Windows, Mac, and Linux platforms in Basic and Advanced versions. CityEngine Advanced is available with single or concurrent use licensing and comes with all features, including Python and advanced import/export format support.

Since 1969, Esri has been giving customers around the world the power to think and plan geographically. The market leader in GIS technology, Esri software is used in more than 300,000 organizations worldwide including each of the 200 largest cities in the United States, most national governments, more than two-thirds of Fortune 500 companies, and more than 7,000 colleges and universities. Esri applications, running on more than one million desktops and thousands of web and enterprise servers, provide the backbone for the world’s mapping and spatial analysis. Esri is the only vendor that provides complete technical solutions for desktop, mobile, server, and Internet platforms. Visit us at esri.com/news.