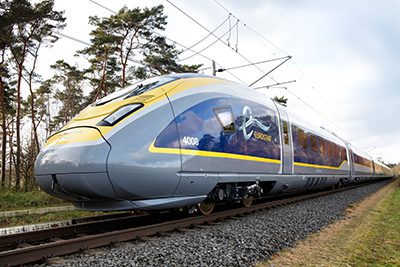 SACRAMENTO, Calif. – The California High-Speed Rail Authority (Authority) today released the Draft 2016 Business Plan, a foundational document for implementing the California High-Speed Rail program that reflects the transition from planning to construction to providing passenger service. Overall capital costs are reduced from $67.6 billion to $64.2 billion. The plan also provides the path forward for the construction and operation of a section of the high-speed rail program, using existing funds, which will generate revenue within the next decade.

“This Draft Business Plan presents a clear path forward within available funding to deliver the system as approved by California voters in 2008,” said the Authority’s Chief Executive Officer Jeff Morales. “By constructing the line between the Silicon Valley and the Central Valley, while also making significant investments in Southern California’s passenger rail systems, high-speed rail service will become a reality in this state in the next 10 years at a lower cost than previously estimated.”

This draft plan, which is required by Assembly Bill 528 (Lowenthal, Chapter 237, Statutes of 2013), summarizes the progress made over the last two years, updates available funding and financing, forecasts ridership, and updates risk management information. In this plan, the Authority highlights three objectives to move the high-speed rail program forward.

The first objective is to initiate high-speed rail passenger service as soon as possible in order to bring benefits to California and generate revenues to attract private sector participation. With existing funding and more than 100 miles of active construction in the Central Valley already underway, the Authority will complete the construction of the high-speed rail line between Silicon Valley and Central Valley by 2024, with operations beginning in 2025.

The second objective is to make strategic, concurrent investments throughout the system that will be linked together over time. Investments that connect state, regional and local rail systems, will provide immediate mobility, environmental, economic and community benefits. For example, the Burbank to Anaheim corridor is of regional and statewide significance and is critical to supporting the economy of Southern California. Today’s plan proposes join with local partners to improve this corridor, including the highest priority grade separations in the state (Rosecrans Avenue/Marquardt Avenue, the Southern California Regional Interconnection Project) and improvements at Los Angeles Union Station. These and other investments identified in this Draft 2016 Business Plan will increase capacity, improve
safety in this highly-congested travel corridor, and improve air quality.

The third objective is to construct additional segments as funding becomes available. This requires completing the environmental analyses for every mile of the program and securing environmental approvals. The Authority will continue to move forward with clearing all project sections between San Francisco and the Los Angeles/Anaheim area by 2017.

With the release of today’s draft plan, the Authority is now seeking public comment as part of a 60-day public comment period that will close on April 18, 2016. Comments may be made online, via USPS, and at regularly scheduled board meetings in March and April 2016. Timely comments become a permanent element of the published plan. The Authority is required by Public Utilities Code Section 185033 to prepare, publish, adopt and submit an updated Business Plan to the Legislature on May 1, 2016.

The Authority is providing five methods for submitting comments on this draft plan:
1. Online comment form through the Draft 2016 Business Plan website
2. By email at: 2016businessplancomments@hsr.ca.gov
3. By U.S. mail to the Authority:

The Draft 2016 Business Plan can be found online at:
www.hsr.ca.gov/About/Business_Plans/Draft_2016_Business_Plan.html