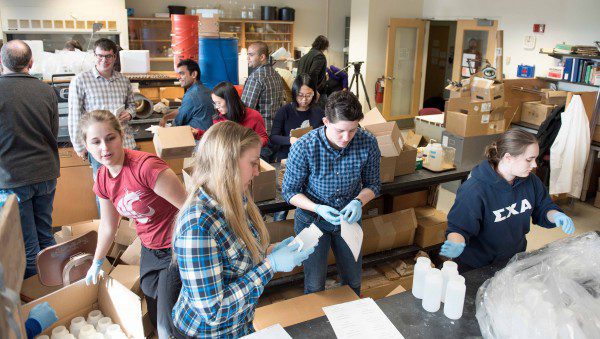 For people worried about bad water, testing begins at home.

“The water has to rest in the plumbing for at least six hours,” said Siddhartha Roy, a graduate civil and environmental engineering student at Virginia Tech. “People can go to sleep for the night and first thing when they wake up, they should take ‘first draw’ samples.”

Roy and about a dozen other Virginia Tech students were in a Durham Hall lab on Friday morning, packing up bottles and printing water-testing instructions for delivery to Flint, Michigan.

“This is mainly how water-testing is done in the United States,” Roy said. “Residents call their local water suppliers for test kits and collect the water themselves.”

But this is a little different.

As the students worked, a not-so-common machine whirred away, largely unnoticed by everyone in the lab except for research scientist Jeffrey Parks.

Called an inductively coupled plasma mass spectrometer, the machine uses positively charged ions in high-temperature plasma to detect metals — the same tool that confirmed the high levels of lead in the Flint water last summer, only at work on another job.

Last summer, a Flint resident reached out more than 500 miles to Virginia Tech for help, after officials said the orange water flowing into residents’ homes was OK to drink.

That first round of testing was a wake-up call to the nation.

Virginia Tech students and faculty, led by Marc Edwards, the Charles Lunsford Professor of civil and environmental engineering, discovered more than 133 times the amount of lead on average was in the water than the maximum allowed by the U.S. Environmental Protection Agency.

“We hope the lead levels have gone down, but until we do the sampling, we won’t know,” Roy said.

The August 2015 testing by the Flint water study team was the only sampling event in Flint done in accordance with the intent of the EPA’s Lead and Copper Rule. The new sampling, to take place in the next several weeks, will be the best way to gauge what has happened to lead levels, especially since water is no longer being drawn from the corrosive Flint River. The supply reverted back to Lake Huron in October 2015.

The same 271 homes originally tested will be tested again. After sampling, it will be about six more weeks before the nearly 300 samples are returned and analyzed. The results will be posted on the Flint Water Study website.

Edwards expects testing will show lead contamination has dropped. In addition to the water being drawn from a cleaner source, chemicals are now added to the water to prevent lead from escaping pipes.

But problems will remain. Even if levels are under the federal safety standard, Edwards said lead pipes should be replaced.

“I hope Flint can become a model for lead pipe replacement in the United States,” said Edwards, who recently testified before Congress about lead contamination in municipal water supplies.

The task is especially difficult in Flint, because even the seemingly simple matter of locating the pipes is complicated — reports show half of the land parcels have piping of unknown origin.

In addition to lead, Virginia Tech researchers visited Flint homes and businesses in August and October to sample for Legionella bacteria — a capability Virginia Tech developed in part through the efforts of Amy Pruden, a professor of civil and environmental engineering, in association with the Institute for Critical Technology and Applied Science.

The researchers found potentially dangerous Legionella levels, substantially higher than those found in a nationwide EPA study on drinking water.

“The highest levels we found were in large buildings and more moderate levels of lead were found in homes and small businesses,” said Otto Schwake, a microbiologist and a postdoctoral associate in civil and environmental engineering. “We will go back and do additional sampling in March.”