Buildings Wrapped in High-Efficiency, Flexible Solar Cells? It Could Happen 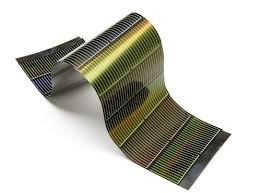 A patented breakthrough by researchers at the Technion-Israel Institute of Technology improves the efficiency of organic photovoltaic cells by 50 percent, and could someday provide a huge boost for the viability of solar power as a major source of energy. The researchers recently published their findings in the Journal of Applied Physics.

Organic photovoltaic cells convert solar energy into electric power through organic molecules. One of their advantages over “traditional” solar cells made of silicon is that they can be mounted on lightweight, flexible, and easy-to-replace sheets, which can be spread on roofs and buildings like wallpaper, converting solar energy into electrical current. In the future, they could also be used to provide a cost-efficient and reliable source of electricity in isolated regions.

Despite the advantages of organic cells, their conversion potential to this point has not been fully utilized, according to lead researcher Professor Nir Tessler, of the Technion Faculty of Electrical Engineering, and director of the Wolfson Microelectronic Center and of the Sarah and Moshe Zisapel Nanoelectronics Center at the Technion.

“In our study, we found that the organic photovoltaic cell’s efficiency and electricity production are limited by structural aspects,” he explains. “We have proved that the limitations are related not to the material, but to the device structure. We have developed an addition to the existing systems, improving the efficiency of converting solar energy into electric current inside the cell from 10% (a level considered to be “high efficiency”) to 15% (the level at which industry experts say organic solar cells will be cost-effective), and adding 0.2 volts to the cell’s voltage.”

The development is based on increasing the energy gap between the electrodes by changing their fixed position in the system. By doing so, the researchers were able to increase the voltage, leading to an increase in system power. “This improvement is significant for the relevant industry, and it was achieved by focusing on structural changes in the device, versus developing new materials, a common approach by researchers in this field. It seems as if we have stretched the laws of physics with the aid of engineering.”

Prof. Tessler estimates that he and his team will complete the development of a prototype system within a year.

The Technion-Israel Institute of Technology is a major source of the innovation and brainpower that drives the Israeli economy, and a key to Israel’s renown as the world’s “Start-Up Nation.” Its three Nobel Prize winners exemplify academic excellence. Technion people, ideas and inventions make immeasurable contributions to the world including life-saving medicine, sustainable energy, computer science, water conservation and nanotechnology. The Joan and Irwin Jacobs Technion-Cornell Institute is a vital component of Cornell Tech, and a model for graduate applied science education that is expected to transform New York City’s economy.

American Technion Society (ATS) donors provide critical support for the Technion—more than $2 billion since its inception in 1940. Based in New York City, the ATS and its network of supporters across the U.S. provide funds for scholarships, fellowships, faculty recruitment and chairs, research, buildings, laboratories, classrooms and dormitories, and more.