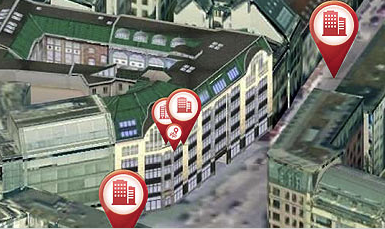 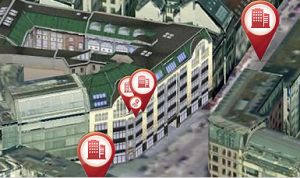 If you own a smartphone or a tablet, you can now put Berlin into your pocket – at least virtually, that is. The 3D model of Berlin, the German capital, is now available as the free “smartMap Berlin” app for iPhones and iPads. Adaptations for the “smartMap” in 2013 will include more functions and plans are also under way for Android and Windows versions. The app has been developed by “3D Content Logistics,” a start-up from the Berlin region, in close cooperation with the Business Location Center from Berlin Partner GmbH, the city’s economic development corporation.

With the help of 3D Content Logistics, Berlin is a step ahead of Apple on the technology front: In contrast to the 3D map service for the iPhone 5 that was released a few days ago, “smartMap Berlin” can securely and easily depict photo-realistic 3D images of the city on older iPhones and iPads from earlier generations. The software functions with low processing power and transmission bandwidth, which enables it to work on smartphones and in the 3G mobile network. And, unlike Apple, the start-up from Potsdam and Berlin Partner GmbH, Berlin’s economic development corporation, were not satisfied with only showing the government quarter. The “smartMap Berlin” depicts Berlin in its entirety – a total of roughly half a million buildings and more than 800 km² of city area.

Nicolas Zimmer, state secretary in the senate department for economics, technology and research, said at today’s launch: “We are breaking new ground and are presenting Berlin with innovative technology. In order to do this, we are taking advantage of the region’s scientific excellence and are cooperating with companies that are global leaders in their segment’s technology. The Business Location Center, which is supported by the Berlin state government, and its partners are an outstanding example.”

Benjamin Hagedorn from 3D Content Logistics explained: “Our technologies make complex 3D content finally available to practically every end device. The transmission needs only a fraction of the network bandwidth compared to conventional approaches. The “smartMap” software is compatible with almost every mobile device because it needs only moderate processing power. The only adjustments needed are for the user interfaces that depend on the particular end device. 3D Content Logistics’ technologies enable users to have access to complex 3D content for smartphones, tablet PCs and web browsers, too. The sensitive data

itself is protected because it remains on the provider’s servers. Furthermore 3D space, in the virtual city model, can intelligently add supplementary information, relevant to the situation, for residents, companies and the city’s administration.”

Melanie Bähr, the managing director at Berlin Partner GmbH, added: “From now on, when we are discussing opening new businesses during our international meetings with investors, we’ll have all of Berlin with us in our briefcases. Via smartphones and tablets we will also be able to reach our mobile and technically-adept target group of decision makers in companies in an even more direct manner. These people can access the highly informative and attractive 3D presentation of Berlin as an investment location. The BLC’s commercial real estate portal is integrated into the 3D model; it shows the current available commercial real estate in Berlin. This encourages that investment decisions are made for Berlin.”

The app can be downloaded, free of charge, from the iTunes App Store by searching for “smartMap Berlin.”