/ Uncategorized / The Fate of Sediment When Freshwater Meets Saltwater

The Fate of Sediment When Freshwater Meets Saltwater 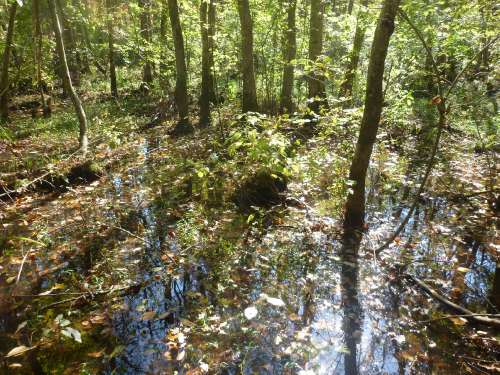 Two recent USGS investigations have measured sedimentation rates along the barely perceptible slope of rivers as they empty into estuaries. The findings of these studies have important implications for the restoration of estuaries — for example, the Chesapeake Bay — and their resilience in the face of sea level rise.

The studies compared the sedimentation rates found in upriver tidal freshwater swamps (located at the furthest inland reach of tides) to the rate found in brackish water marshes downstream at the lowest reaches of the rivers.

“Sediment trapping in tidal freshwater wetlands is critical for protecting the water quality of estuaries and enhancing the resilience of those wetlands to sea level rise,” said Scott Phillips, USGS science coordinator for the Chesapeake Bay. “These wetlands help reduce nutrients and contaminants from reaching the Bay and also provide critical habitat for waterfowl.”

This process leaves minimal sediment availability to tidal freshwater wetlands just below the head-of-tide, producing a “sediment shadow” that reduces the resilience of wetlands to the impacts of sea level rise. The shadow of reduced sediment accumulation also means that Atlantic Coastal Plain watersheds have very little of their watershed sediment delivered to estuaries and the coastal zone.

Moreover, the Noe study found, sediment accumulation rates have changed over time. Historically, even more sediment was trapped by the upriver tidal freshwater wetlands. The change is likely due to greater availability in the past of “legacy” sediment from post-colonial land use and soil erosion. Modern sediment trapping is greatest overall in downriver brackish wetlands, likely due to sea level rise that has moved the estuarine turbidity maximum upstream.

Together these studies, along with others, show that tidal freshwater wetlands downstream of the head-of-tide have the lowest sediment accumulation rates along river-to-estuarine gradients. Consequently, these areas may have the least resilience to increased rates of sea level rise. In general, sediment trapping helps tidal wetlands increase in elevation to keep pace with rising sea levels. The effect of excessive saltwater exposure on tidal freshwater swamps is easily seen in places where tree death has produced spindly “ghost forests” that eventually convert into brackish marshes.

The sediment shadow also means that little of the watershed sediment and associated nutrient loads in lowland coastal rivers actually reaches estuaries. For example, in the smaller rivers that empty into the Chesapeake Bay (characterized by extensive tidal freshwater wetlands in contrast to minimal tidal freshwater wetlands found in large embayed tributaries), a large portion of the watershed sediment load (and associated phosphorus and nitrogen) is removed by tidal wetlands prior to reaching the bay.

These new insights about the complexity of sediment, carbon, and nutrient transport from watersheds to estuaries can help water quality managers to more accurately forecast the effects of watershed changes on estuarine water quality and improve adaptive management.