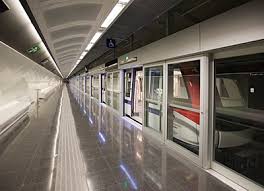 In Barcelona, the extension of the driverless metro Line 9 has gone into operation. The some 20-kilometer-long line connects the university in the center of the city with Terminal 1 of the El Prat de Llobregat airport. Siemens equipped the line with an automatic train control system for driverless operation. The wireless system for automated train control provides real-time data on train location and speed, increasing headway and passenger capacity.

At more than 30 kilometers long and with 23 stations, Line 9 runs through the whole city of Barcelona, making it the longest driverless metro line in Europe. Five years ago, the first eleven kilometers of the line were opened for business, and now the continuation of the line to the airport is another 20.7 kilometers long. Passengers can board and exit trains at 15 stations along the way. Siemens supplied the Trainguard MT automatic train protection system, using wireless CBTC technology (communications-based train control) to achieve fully automatic operation. Special platform screen doors provide added safety: Like shuttle trains at larger airports, glass doors separate the platform from the train. The doors do not open until the train has stopped at the platform.

The line is designed to accommodate some 330,000 passengers daily and offers a maximum transport capacity of some 165 million passengers a year. Currently, a further 18-kilometer-long stretch of the line is under construction. Once complete, the line will have a total length of about 50 kilometers, only four kilometers of which are above ground.

Siemens has equipped more than 300 track kilometers worldwide with signaling systems for driverless operation, making it the market leader in this field. In addition to Line 9 in Barcelona, Siemens also operates the L Line in New York, Line 4 in São Paulo, Brazil, and Lines 1, 14 and 4 in the Paris metro with this system.