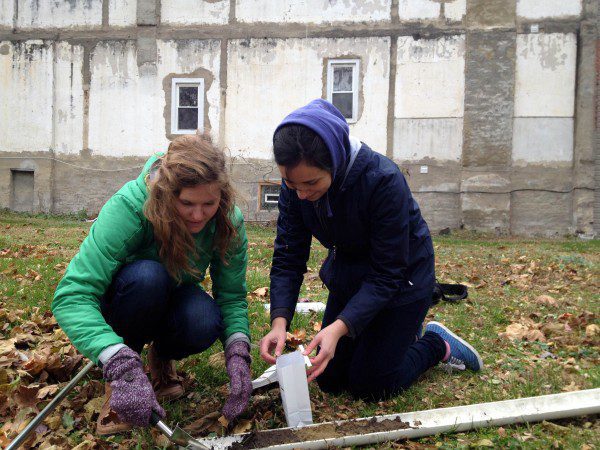 Feb. 10, 2016—Four empty lots in Chicago’s South Side bear scars of the past. Their surfaces are strewn with construction debris and foundation rubble. However, the most incriminating evidence of the past lies beneath the surface, in the soil.

Chicago’s history of industrialization and urbanization left its mark on the soil. Soil acts as a sponge, and can host contaminants for years. In Chicago, the waste from industrial manufacturing causes undesirable toxic organic chemicals, heavy metals, and other chemicals to linger in the soil. This can pose problems for the health of the humans and plants that inhabit the land years later.

The four empty lots are owned by the Gary Comer Center, a non-profit youth development center in the Greater Grand Crossing neighborhood. The Comer Center’s long-term hope is to repurpose the lots into useful spaces for the community. However, the poor quality soils in the lots create challenges.

“They are going to need some serious TLC to bring them back,” says urban soil scientist James Montgomery.

Montgomery is an associate professor in the Department of Environmental Science and Studies at DePaul University. He and his team trained a group of undergraduate students from DePaul to test the soil on the lots in collaboration with the Comer Center. The soils are all in poor shape. They have a high alkaline level, and contain chemical and lead levels above the amount recommended by the EPA.

To Montgomery, this isn’t a hopeless case: “We want to work with the Comer Center and help them realize their vision for using these lots, whatever that might be,” he says.

The Comer Center’s eventual goal, whether it’s the installation of urban gardens, parks, or buildings, will dictate how much cleanup is needed to improve the soil. Remediation can be as intensive as physically removing and replacing the soil, or as simple as tilling it up and adding amendments.

The presence of lead, heavy metals, and excess chemicals may call for containment using green infrastructure. One purpose of green infrastructure is to interrupt the journey of contaminants into water sources, where they can spread or infiltrate drinking water sources. It can include bioswales, rain gardens, or vegetative buffers. Plans can include plant species capable of ingesting heavy metals or excess chemicals in the soil.

Montgomery says that soil testing should come first when deciding what to do with a piece of property. “You go to a doctor for a preventative check-up and we should do the same with soil.”

Testing the soil is usually inexpensive and can indicate what’s needed–and what isn’t needed–to improve it. “It’s part of understanding your home,” says Montgomery. “If you have a soil test done and it’s showing you’ve got excess chemicals, then maybe you don’t need to spend as much money on amendments to the soil.”

For Montgomery, soil health is an environmental justice issue. Low-income and underserved neighborhoods are rife with poor soils. There has been little reconstruction in the Greater Grand Crossing neighborhood since the 1930’s. Approximately 78 percent of the residents are below the poverty line. “We definitely need to be at the table advocating for environmental justice in these communities that are wracked by poor soil quality,” says Montgomery.

Montgomery notes that community participation in this project is particularly important. “The point is not to have the university come in and dictate,” he says. “The Comer Center is driving this bus and that’s how it should be.”

Montgomery says they plan to hold planning sessions with the community to discover what they envision for the lots. They will use the results of the soil test to better inform their next move.