/ Analysis / Flood Risk Can be Higher with Levees than Without Them

Flood Risk Can be Higher with Levees than Without Them 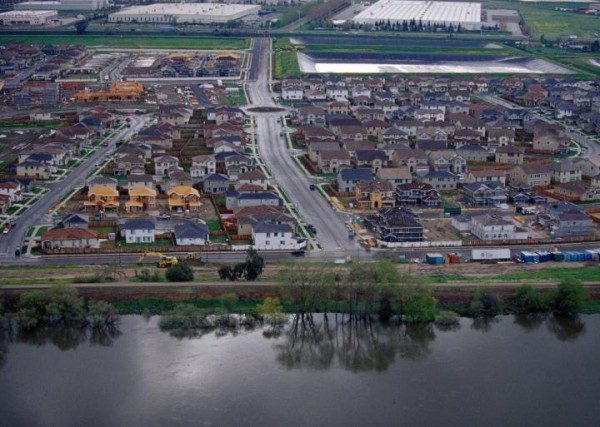 People living behind levees on floodplains may not be as immune to flood damage as they think, according to results of a study led by the University of California, Davis.

Levees often prevent costly flood damages and even loss of life. However, when those levees overtop or fail, and water spills onto the floodplain, the long-term damage can be far worse than if those levees were not there, the study found.

The study, published this week in the journal Environmental Science & Policy, estimated long-term flood risk, probabilities of levee failure, and resulting economic losses in the Sny Island levee district along the Mississippi River in Illinois and Missouri.

“Levee protection does prevent flood damages locally, but it needs to be examined very carefully, structure-by-structure, and quantified for all people and economic activities affected by that protection,” said lead author Nicholas Pinter, a professor of earth and planetary sciences at UC Davis.

The study period preceded the massive flooding the Midwest endured this fall, which occurred in a separate section of the Mississippi River. However, Pinter said the same risks and benefits occurring in his Midwest case study apply to many levee systems worldwide.

The scientists modeled four flood conditions — 2-year, 5-year, 100-year and 400-year flood levels — with and without levees. Levee failures were also modeled. The study included floodplain land excluded from flood hazard maps because it is behind levees accredited by the Federal Emergency Management Agency. The researchers noted that excluding such lands underestimates the actual flood risk nationwide.

Because levees raise flood levels in surrounding locations, they are known to export flood risk from one set of floodplain residents to their neighbors. For example, the study documented up to 8 feet of additional water imposed on the town of Hannibal, Missouri, due to the Sny Island levee.

Overall, the research team found that the Sny levee system prevents about $51 million per year in flood damages, primarily for the agricultural sector and some low-elevation properties. However, for up to a third of residential structures and 22 percent of commercial structures behind the Sny levee system itself, the flood damage risk was higher with the levees than it would have been without them, because of the catastrophic nature of levee failure.

This counterintuitive “negative benefit” of levees — meaning the actual increase in risk to some residents behind levees — is on top of the export of flood risk to a levee district’s neighbors, and other levee impacts.

U.S. floodplains are lined by more than 100,000 miles of levees, many of which are in questionable states of repair. The prevalence of levees across U.S. floodplains should be viewed as opportunity, the researchers said.

Some levees can be targeted for alternative measures, such as setbacks, bypass channels, flood easements and even local removal. These kinds of projects can lower flood levels, recharge groundwater and restore habitat.

“The positive thing is that levees are so extensive in the U.S., that there are widespread opportunities for rebalancing flood risk and, at the same time, improving river and floodplain ecosystems,” Pinter said.

Q: What can the Sacramento region learn from your study?

A: Levees are a useful and necessary part of our flood management portfolio. But not every new levee or enlargement of a levee is a good project. We’ve suggested a three-part sniff test: Levees are an appropriate solution when they protect infrastructure — people, buildings — that is 1) concentrated, 2) of high value, and 3) pre-existing.

Natomas was a field-of-dreams levee, and most flood researchers and floodplain managers would point to that as a mistake. You don’t take largely undeveloped floodplain, build a big wall and then build billions of dollars of new infrastructure behind it. The beneficiaries of such projects are the developers and the local tax base, but residents, the state, and U.S. taxpayers are left with a Pandora’s Box of residual risk and liability.

But there are other spots, like downtown Sacramento, that are pre-existing, concentrated and of high economic value, so a levee there makes sense. Even more so with the added protection afforded by the Yolo Bypass.

We’re saying, do careful analysis, assess all the benefits and the costs, including to the environment, and pick the optimum solution.