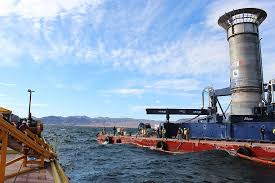 Listed among six projects selected from around the world, Lake Mead Intake No. 3 is the world’s deepest subaqueous tunnel and is considered one of the most challenging tunneling projects ever undertaken. Requiring construction of a three-mile concrete-lined tunnel beneath the lake bed, the project required excavation at unprecedented hydrostatic pressure caused by the weight of hundreds of feet of lake water above the tunnel alignment. As a 1,700-ton tunnel boring machine inched its way through difficult geologic conditions for several years, workers constructed a railroad track in its wake to remove material and deliver supplies. In December 2014, the machine docked with an intake structure deep within the lake that was secured to the bottom by more than 1,000 truckloads of concrete. After more than 15,000 feet of underground tunneling spanning three years, the crew carefully mined through the intake’s port within millimeters of the center mark.

“Together with the designer and builder of the intake project, we are honored to be considered for this award, which represents the pinnacle of modern civil engineering achievement,” said Marcus Jensen, Director of Engineering for the Southern Nevada Water Authority (SNWA). “Lake Mead Intake No. 3 has been the most ambitious project ever undertaken by the SNWA. During the course of the project, our team focus was singularly on the task at hand. However, once the work was done, we had the opportunity to step back and consider the challenges we overcame and the magnitude of what we accomplished. It is quite humbling.”

Past award winners include Hoover Dam, the World Trade Center and the Gateway Arch in St. Louis. The ASCE will announce the winner March 17 in Virginia.