/ Financial / Overwhelming Response by Cities across the Country to U.S. Department of Transportation Smart City Challenge

Overwhelming Response by Cities across the Country to U.S. Department of Transportation Smart City Challenge 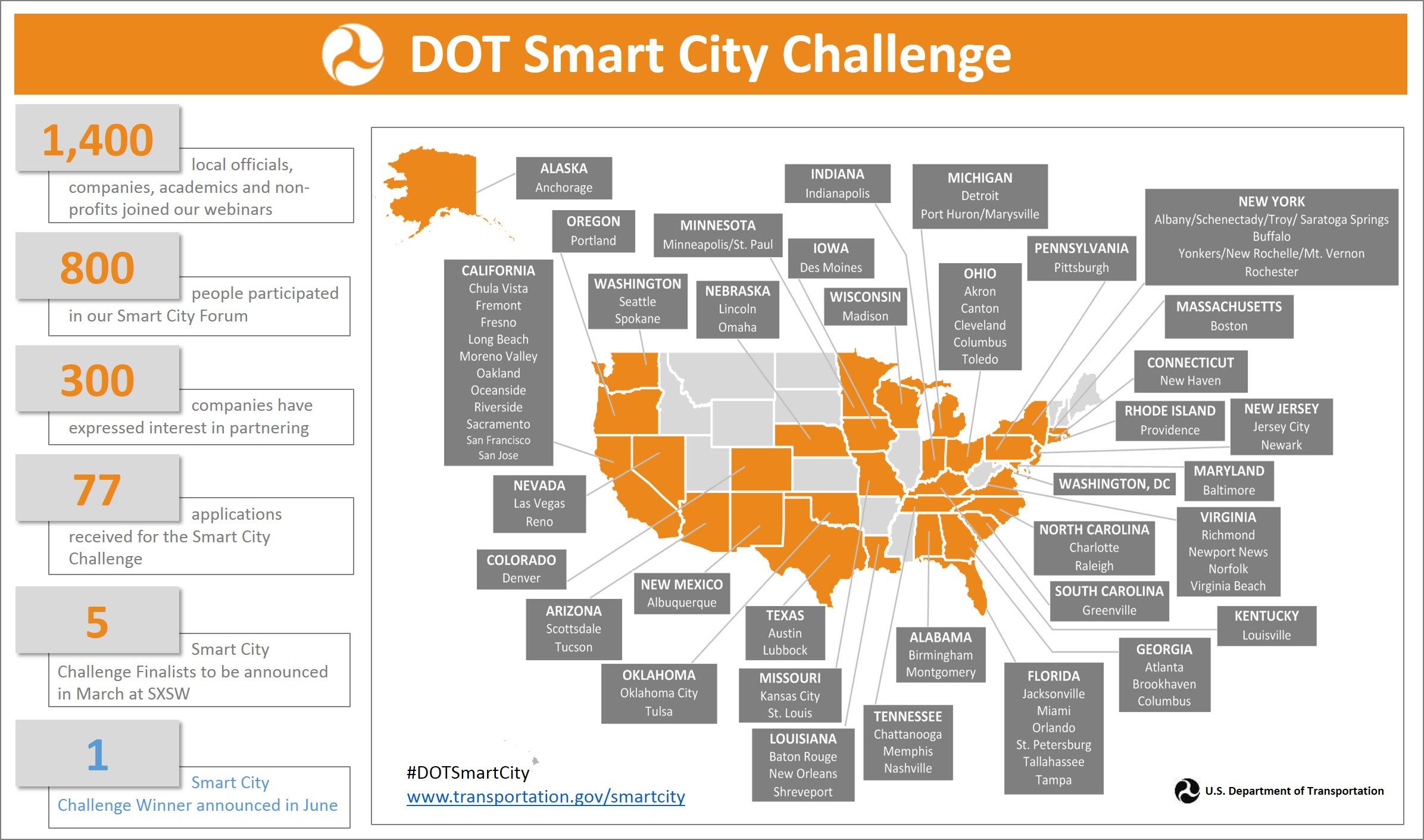 WASHINGTON – Transportation Secretary Anthony Foxx announced today that seventy-seven cities have submitted applications for the first-of-its-kind U.S. Department of Transportation Smart City Challenge.  Medium-sized cities from across the country from Reno to Rochester and Anchorage to Albuquerque represent the depth and breadth of this Challenge.  The competition seeks to create an innovative, fully integrated model city that uses data, technology and creativity to shape how people and goods move in the future.

The winning city will be awarded up to $40 million from USDOT to implement bold, data-driven ideas that make transportation safer, easier, and more reliable.  Additionally, Paul G. Allen’s Vulcan Inc., has announced its intent to award up to $10 million to the challenge winner to support electric vehicle deployment and other carbon emission reduction strategies, and Mobileye announced that it would outfit the entire fleet of the winning city’s public bus system with its Shield +TM driver-assistance safety technology.

Applications were submitted from cities across the country and applicants were asked to include a range of innovations and data-driven platforms to anticipate and address community needs.  Specifically, USDOT is looking at how to integrate multiple innovations such as automated vehicles, the sharing economy and other technologies into a network that connects people to their intelligent transportation system.

“I issued this Challenge in December and quite frankly, we are very impressed by the response by community leaders across the country.   Cities understand that in order to plan for tomorrow, they need to embrace technology and innovation.” said U.S. Transportation Secretary Anthony Foxx.  “This Challenge is going to do more than just help one city adopt innovative ideas. Instead, it will serve as a catalyst for widespread change in communities across America.”

“The extensive interest this Challenge has generated demonstrates the tremendous opportunity to transform our country’s transportation systems,” said Barbara Bennett, President and Chief Operating Officer of Vulcan Inc. “Electrification of transportation will play a critical role in reducing greenhouse gases. Paul Allen’s support for this program underscores his belief that innovation is a critical component in the pursuit to protect our planet.”

USDOT developed the Smart City Challenge as a response to the trends identified in the Beyond Traffic draft report. That report, issued in February of 2015, reveals that our nation’s aging infrastructure is not equipped to deal with a dramatically growing population inregions throughout the country and identifies a need to increase mobility options in developing megaregions – and specifically, that this will be especially challenging for mid-sized cities.

For the challenge, USDOT invited cities to submit a high-level description of their vision by February 4, 2016, and supported prospective applicants with numerous forums, webinars, and other resources.  Five finalists will be announced at SXSW in Austin on March 12, and the finalists will each receive one hundred thousand dollars to hone their proposals and develop applications for the final selection process scheduled for June 2016.  Vulcan will be working with USDOT to assist the five finalist cities with technical guidance and other support in keeping with its commitment to leverage technology, investmentsand philanthropy to drive a low-carbon future.