/ Buildings / Groundbreaking Ceremony for the New Extension at the Norton Museum of Art, Florida

Groundbreaking Ceremony for the New Extension at the Norton Museum of Art, Florida 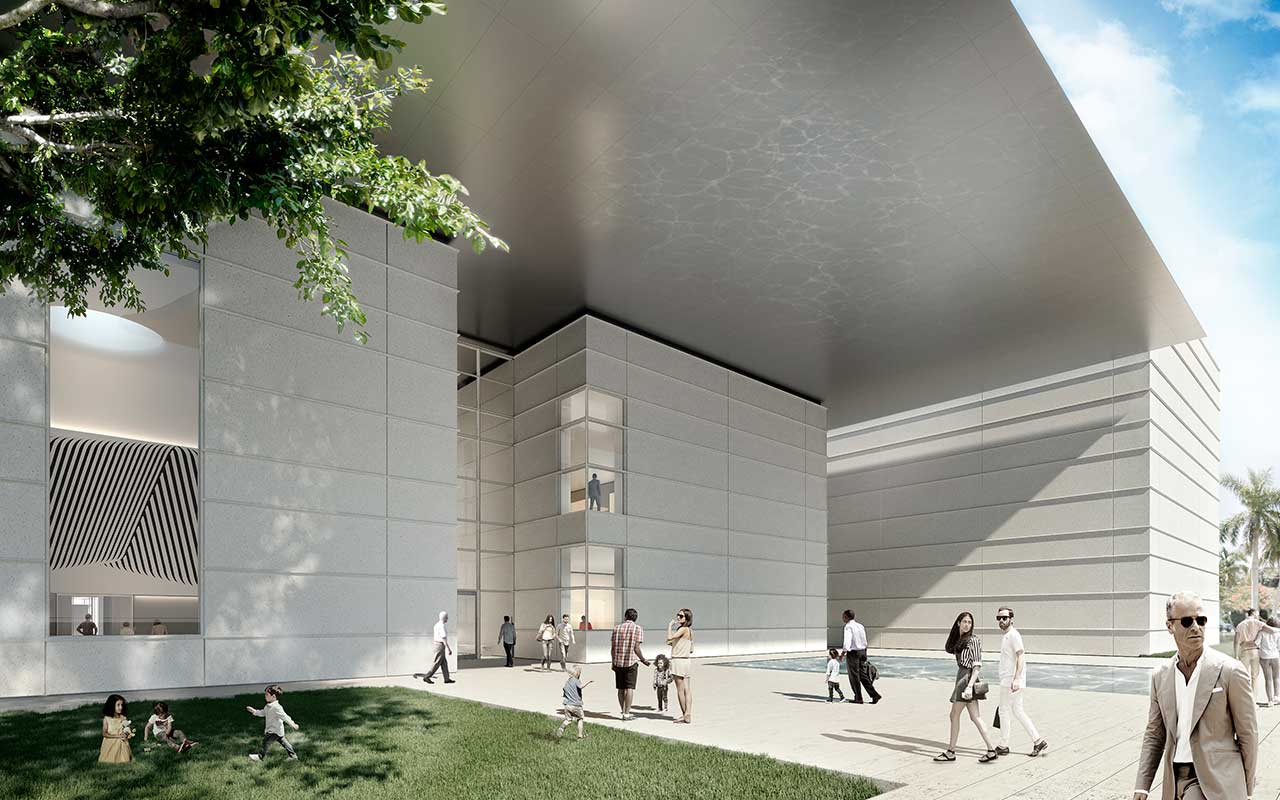 A gala was held in Palm Beach today on the occasion of the 75th anniversary of the Norton Museum of Art, which coincided with the groundbreaking ceremony for The New Norton. The event was attended by Lord Foster along with Norton Executive Director Hope Alswang, and Norton Board of Trustees Chairman Harry Howell. The New Norton will revitalise and expand the existing museum, adding more galleries and visitor facilities, while restoring the original axial layout of the Museum, set within an exotic Floridian landscape. It seeks to enhance the experience of art by reinforcing the relationship between the building and the landscape and create a new social focus for the community. It also lays the foundations for the future growth of the museum to become one of Florida’s leading cultural institutions.

The Norton Museum of Art in West Palm Beach was built in 1941 to house the art collection of the industrialist Ralph Hubbard Norton and his wife, Elizabeth. The museum was laid out by the architect Marion Sims Wyeth as an elegant series of Art Deco inspired single storey pavilions around a central courtyard. Subsequent expansion broke the symmetry of the original arrangement, and the axial configuration was destroyed by the relocation of the main entrance from South Olive Avenue to the south side of the building. The new masterplan restores the logic of Wyeth’s plan, reasserting the clarity of the main axis, balancing the different building heights and providing flexible, welcoming visitor facilities to attract a wider local and international audience. The masterplan also provides the infrastructure for two additional exhibition wings towards the eastern end of the building to be built in the future.

A new street frontage facing South Dixie Highway to the west redefines the museum’s relationship with its surroundings and reasserts the main entrance on the central axis. The new entrance is signalled by three new double-height pavilions, which mediate between the low-rise galleries and the existing three-storey Nessel Wing, thus unifying the whole composition with a shared palette of man-made white stone. The pavilions house a state-of-the-art auditorium, the Grand Hall, which will be the new social heart for the local community, an event space, education centre, and a museum shop and restaurant that can operate independently of the museum at night.  All of these are unified beneath a shimmering canopy, which projects over the entrance plaza creating a new public space. In addition, the new scheme will add 12,000-square-feet of gallery space and is designed to complement the existing building, making it more legible, open and in harmony with its natural setting.

The perimeter of the museum’s expanded grounds is defined by the lush landscape and a row of houses along the southern border of the site as artists’ residences and studios, guest house and research facilities. Taking advantage of the Florida climate, the landscaping of the gardens and central courtyard incorporates native trees and flowers to provide shaded walkways, and a new green lawn. The lawn provides an open-air venue for ‘Art After Dark’, the Norton’s popular evening programme, as well as live performances and events.

Lord Foster, Founder and Chairman, Foster + Partners:
“The new extension of the museum represents an exciting opportunity to place the reinvigorated Norton at the heart of Florida’s cultural life and to establish its international presence, allowing more people to enjoy the museum’s very special collection. Reinforcing its natural setting with a ‘museum in a garden’, our aim has been to restore a sense of clarity to the existing building by reasserting the logic of the original plan; creating new event and visitor spaces that will transform the museum into the social heart of the community; as well as increasing the gallery and exhibition spaces, to engage with a wider audience, both local and national.”

Spencer de Grey, Co-head of Design, Foster + Partners:
“This groundbreaking ceremony marks the moment where the process that began five years ago with the masterplan finally comes to realisation. Our approach at the Norton has been to make art more accessible by dissolving boundaries – whether that is between the building and landscape or art and the viewer. In addition to the increased exhibition areas, The New Norton will feature at its heart the Grand Hall as a new social focus for Palm Beach. We are delighted to be working with the Norton Museum of Art on this project and we look forward to the completion of the museum with great anticipation.”

Hope Alswang, Executive Director, Norton Museum of Art:
“As the Norton celebrates its 75th anniversary, we applaud founder Ralph Norton’s generosity and foresight, while also looking toward the future. With design development complete, we are excited that the Norton Museum of Art is poised for a remarkable transformation and set to break ground on the Foster + Partners-designed expansion.”

@ARTBA, Construction Industry Allies Develop COVID-19 Guidance Materials https://t.co/NrHKzg16ML
13 hours ago
@FTA_DOT Makes Emergency Funding Available for #Coronavirus Needs https://t.co/3j7xg4ITu9
1 week ago
@OnScaleInc OnScale is Providing Free Cloud Core-Hours to Customers to Mitigate Engineering Productivity Loss Relat… https://t.co/2kznD1Kh0d
2 weeks ago
You can also visit our website (https://t.co/5ChDhKH2IT) to verify the latest conference cancellations and postpone… https://t.co/DhAiikvEtB
2 weeks ago
With limitations on travel and working from home becoming mandated across the country and globe, please feel free t… https://t.co/OTQosM2hWP
2 weeks ago
it will be “business as almost usual” here at Informed Infrastructure. All of the contact information you find in t… https://t.co/osIMDhV6bP
2 weeks ago
STAY SAFE OUT THERE: In these trying times, we aim to be a vital resource for our readers and the engineering commu… https://t.co/qFrDnwEbKv
2 weeks ago
@aisc Cancels 2020 #NASCC: The Steel Conference Due to Coronavirus Threat https://t.co/Dd0Nv4nRxI
2 weeks ago
Structural Engineers Foundation Fred Haas Scholarship https://t.co/UDaFz3eW9N @SEAOIYEC
1 month ago
The Washington State Department of Ecology has recently found that Bio Clean’s WetlandMod®, a horizontal flow biofi… https://t.co/YDd90gMra5
1 month ago