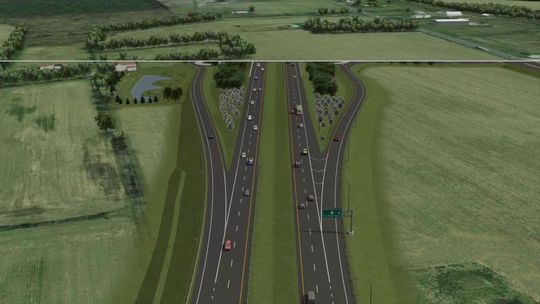 “When completed, the project will link to I-95 and support the economy of not only Delaware but also one of the nation’s largest regions,” said U.S. Transportation Secretary Anthony Foxx. “It will increase access to economic opportunity by making it easier for people to commute to jobs in the fastest growing region of the state.”

The new 13-mile, four-lane tolled highway will link to the existing U.S.301 in Maryland, serving as an alternative route to I-95 into Northern Virginia from south of Wilmington, Del. Locally, the project will serve New Castle county, Del., and Queen Anne’s, Kent, and Cecil counties in Maryland.

“The project will provide truck drivers and individuals with new travel options and provide an important new connection to help move beyond traffic,” said Administrator Nadeau. “Reducing bottlenecks will make it more cost efficient for America’s businesses to move their goods.”

The new U.S. Route 301 will provide commercial trucks with an alternative route and spare them from stop-and-go traffic on local roads. It will support the proposed economic development in southern New Castle County, one of the state’s fastest-growing areas.

When completed in 2020, the route is expected to serve about 14,200 vehicles daily, with traffic rising to 15,900 vehicles per day in the following years.  The existing U.S. Route 301 will be converted into a local roadway, with improvements to accommodate the increased traffic resulting from the projected development.