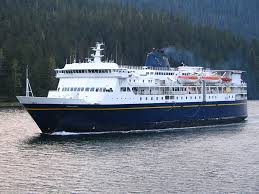 JUNEAU, Alaska—The Alaska Department of Transportation and Public Facilities today released a report on the economic impacts of the Alaska Marine Highway System. The report, prepared by the Juneau-based McDowell Group, found that the state-run ferry system generates a return of more than $2 to the state for every $1 invested.

“The ferry system provides a critical link for many communities,” Governor Bill Walker said. “But I was surprised to learn just how widespread the economic impacts are, accounting for 1,700 Alaska jobs and more than $100 million in wages and benefits.”

The report found Anchorage residents were the number two source of bookings, after Juneau. Other key findings include:

“This study demonstrates why our marine highway system is a vital part of Alaska’s transportation system,” Lieutenant Governor Byron Mallott said. “I look forward to working with coastal communities to strengthen this system in the coming years.”

The report also studied three ferry-dependent communities in depth, finding that the marine highway system is integral to their economies. For example, Copper River Seafoods in Cordova relies on ferry service to transport millions of pounds of fresh seafood from Cordova to Whittier, where it is trucked to Anchorage. The company supports 250 seasonal and 100 full-time jobs in Anchorage.

The Alaska Department of Transportation and Public Facilities oversees 249 airports, 11 ferries serving 35 communities, 5,619 miles of highway and 720 public facilities throughout the state of Alaska. The mission of the department is to “Keep Alaska Moving through service and infrastructure.”

The report may be found online at: dot.alaska.gov/amhs/reports.shtml