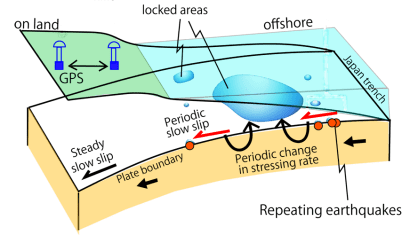 In Japan and areas like the Pacific Northwest where megathrust earthquakes are common, scientists may be able to better forecast large quakes based on periodic increases and decreases in the rate of slow, quiet slipping along the fault.

This hope comes from a new study by Japanese and UC Berkeley seismologists, looking at the more than 1,000-kilimeter-long fault off northeast Japan where the devastating 2011 Tohoku-oki earthquake originated, generating a tsunami that killed thousands. There, the Pacific Plate is trundling under the Japan plate, not only causing megaquakes like the magnitude 9 in 2011, but giving rise to a chain of Japanese volcanoes.

The scientists studied 28 years of earthquake measurements, looking at quakes of magnitude 2.5 or greater between 1984 and 2011. They discovered 1,515 locations off the coast of Japan where small repeating earthquakes happen – 6,126 quakes in all.

According to co-author Robert Nadeau, a UC Berkeley seismologist and a fellow with the Berkeley Institute for Data Science (BIDS), an analysis of these quakes found that larger, more destructive earthquakes – those of magnitude 5 or greater – occurred much more frequently when the periodic slow-slip was fastest. This included the great Tohoku-oki earthquake, which also devastated a nuclear power plant and led to widespread radioactive contamination.

“The persistence of the periodic pattern over time may help us refine earthquake probabilities in the future by taking into account the times of expected slow-slip pulses,” he said. “Right now, seismologists gives forecasts on a 30-year time frame and assume nothing is changing on a shorter time scale. Our study points out that things are changing, and in a periodic way. So it may be possible for scientists to give shorter time ranges of greater and lower probability for larger events to happen.”

The research was led by Naoki Uchida, a seismologist at Tohoku University, and included UC Berkeley seismologist Roland Burgmann, professor of earth and planetary science. They published their findings in the Jan. 29 issue of Science.

Slip, Nadeau said, is the relative motion between two sides of a fault, sometimes but not always resulting in ground shaking. So-called slow-slip or creep is what scientists call “fault slip,” which happens quietly, without generating shaking, not even microquakes or faint tremors.

Regions of a fault that slip quietly are considered to be weak or un-coupled. But within these un-coupled regions of rock underground there are variously-sized patches of fault that are much stronger, or coupled. These patches resist the quiet slip happening around them, only slipping when the pushing and pulling from the surrounding quiet slip stresses them to their breaking point and they “snap” in an earthquake.

“There is a relationship, which we showed here in California, between the time between ‘snaps’ on the small, strong patches where earthquakes happen and how much slip took place on the quiet fault surrounding them,” Nadeau said. “Using this relationship for thousands of repeating earthquakes in Japan, we were able to map out the evolution of slow-slip on the megathrust. Then, by studying the pattern of this evolution, we discovered the periodic nature of the megathrust slow-slip and its relationship to larger earthquakes.”

Nadeau and the late UC Berkeley seismologist Thomas McEvilly showed 12 years ago that periodic slow slip occurred all along the San Andreas Fault, from Parkfield to Loma Prieta, Calif. In 2009 the group also observed deeper, transient and periodic slow-slip on the San Andreas – this time associated with faint shaking called tremor – and that it was linked with two larger quakes occurring in 2003 and 2004 at San Simeon and Parkfield, Calif. respectively.

“The phenomenon we found in Japan may not be limited to megathrust zones,” he said. “Our 2004 study, more limited in scope than this one, showed a similar periodic slip process and an association between larger quakes – those of magnitude 3.5 or greater – and repeating earthquakes along the 170 km stretch of San Andreas Fault that we studied.”

For more information, link to the Science paper.