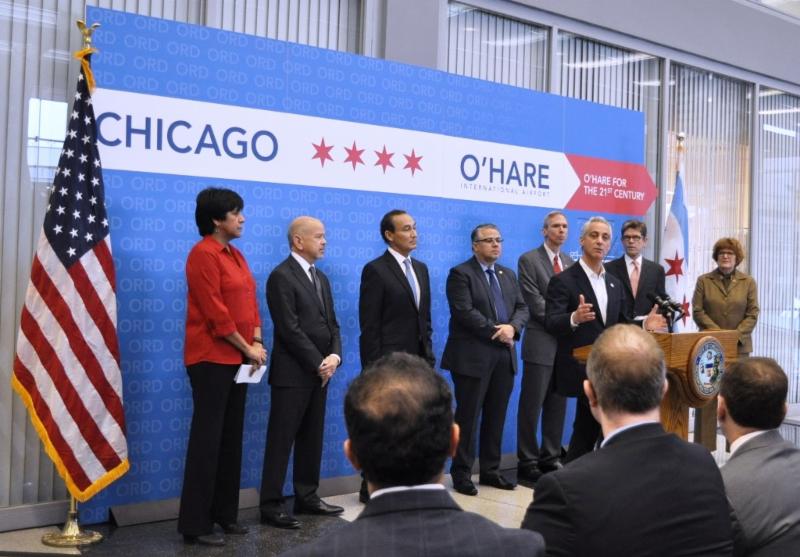 CHICAGO, February 1, 2016—Mayor Rahm Emanuel and the City of Chicago, U.S. Senators Durbin and Kirk, representatives from United and American Airlines, and the Federal Aviation Administration (FAA) yesterday announced a nearly $1.3 billion infrastructure plan for O’Hare International Airport that will create thousands of jobs over the life of the project.

This historic agreement includes a new runway (Runway 9C/27C), deicing pads and other critical airfield projects, paving the way for further airport improvements that will allow O’Hare to increase the number of gates, modernize the terminals and secure Chicago’s future as one of the most important aviation hubs in the world. The thousands of travelers who depend on O’Hare each day will see improved on-time performance and enhanced customer experience due to the increased capacity at the airport and the new projects the city will be able to pursue as a result of the landmark deal.

Runway 9C/27C, scheduled to be commissioned in 2020, will be used for arriving and departing aircraft. The 11,245-foot-long, 200-foot-wide runway will be the second largest runway at O’Hare. This runway will balance the capacity of the north airfield with that of the south airfield, providing increased flexibility for east and west flow operations, as well as balancing noise exposure among communities east and west of O’Hare. The city also plans to ensure that sound insulation of all eligible homes and schools will commence and be completed before the runway opens. The cost of construction for Runway 9C/27C is $648.5 million.

O’Hare’s airfield also will receive a centralized deicing facility to increase the efficiency of the current deicing operations at individual gates, improve on-time performance and the passenger experience. This project will improve gate utilization and terminal capacity, eliminate secondary deicing for departing planes, and enhance runway safety while improving airfield operations. In addition, a new crossfield Taxiway system will be constructed to connect the north and south airfields which will decrease taxi time for planes arriving at O’Hare and improve the customer experience. The construction plan also calls for the relocation of fuel supply lines and airline support facilities, as well as perimeter Taxiways A and B.

“Building a strong future for Chicago depends on building a strong future for O’Hare,” Mayor Emanuel said. “This historic agreement enhances O’Hare’s role as the economic engine of Chicago and the region. The capital plan will improve the passenger experience at O’Hare, while creating thousands of good-paying jobs for Chicagoans. I want to thank everyone involved for their work in securing O’Hare and Chicago’s economic future by getting this deal done.”

“If we are going to be a leader in the world economy, we need the infrastructure to support it,” U.S. Senator Dick Durbin (D-IL) said. “The agreement announced today will help ensure that O’Hare will remain not only one of the country’s busiest airports, but also one of the best. These improvements will lead to a safer, more efficient airport while solidifying O’Hare’s status as an economic engine for the region and a world class air hub.”

“O’Hare is an economic engine for Illinois, the Midwest, and the entire nation,” said Senator Mark Kirk (R-Ill.). “This investment and an updated timeline will complete the O’Hare Modernization Plan, reducing travel delays and increasing our competitiveness in a 21st century economy.”

“This project will further modernize O’Hare’s airfield and significantly increase safety and efficiency; and give air traffic the most flexibility for routing aircraft,” said Chicago Department of Aviation Commissioner Ginger S. Evans. “Chicago will now have a 21st Century airfield. I want to thank the FAA and our airline partners for making this project of national significance a reality. I also want to acknowledge the O’Hare Noise Compatibility Commission and Suburban O’Hare Commission for their hard work to maximize the benefits of our proposed operational changes for residents affected by noise.”

“As Chicago’s hometown airline, we have long been committed to ensuring that O’Hare remains a leading global hub,” said Gavin Molloy, vice president of Corporate Real Estate for United Airlines. “This agreement will help strengthen the airport by improving reliability and efficiency on the airfield while enhancing the overall travel experience for our customers. We thank Mayor Emanuel, Commissioner Evans and Administrator Huerta for their ongoing support, and we look forward to continuing to work together to build a more vibrant O’Hare.”

“I’d like to thank Mayor Emanuel, Commissioner Evans, Sen. Durbin, Administrator Huerta and all of the parties involved who came together to reach this important agreement to make the airfield work more efficiently and move toward our shared vision of a world-class airport,” said Michael Minerva, vice president – Government and Airport Affairs for American Airlines. “These airfield improvements will benefit our customers, our 9,000 Chicago-based employees and the Chicago community for years to come. We look forward to continuing to partner with the City and other key stakeholders in enhancing the customer experience at O’Hare even further in the future.”

“This new runway is one of the final steps in realizing a fully modernized and efficient O’Hare Airport,” said FAA Administrator Michael Huerta. “It is an investment in enhanced safety, both in the air and on the ground, and in a better travel experience for passengers in Chicago and across the nation.”

The construction of Runway 9C/27C and the additional airfield projects will have a major economic impact on Chicago, and ensuring significant local workforce participation will be a priority. Over the next few years, this agreement will create over 5,000 construction and professional services jobs, which will mean more than 1,000 each year for the duration of the effort — and an opportunity to turn hundreds of entry-level jobs into opportunities for our underserved communities. Towards that end, the City will expand on the successful community hiring efforts used for the CTA’s Red Line South project by: working with partners in the City Council and in the federal government to establish new contracting rules to promote these opportunities; organizing outreach through community partners to notify residents about the application process; working with organized labor and our workforce partners to open hiring offices in underserved communities; and working with the City Treasurer to create a new program to help small minority and women-owned firms get financing to participate in these projects.More information about these projects and contracting goals will be a key topic of discussion at the Chicago Department of Aviation’s

“We are thrilled about this important opportunity to bring additional economic development to Chicago’s neighborhoods,” said Shari Runner, President and CEO of the Chicago Urban League. “It is more important than ever before to ensure that the jobs created from modernizing O’Hare Airport help lift up our underserved communities.”

With the completion of the six parallel-runway system, the city, Illinois’ congressional delegation and its airport partners will continue to focus on enhancing the customer experience, increasing amenities for passengers and improving on-time performance at O’Hare. Mayor Emanuel is focused on a strategic vision to bring O’Hare International Airport in to the 21st Century by increasing the number of gates, modernizing and expanding existing terminal space, building a new hotel on the airfield, creating a mode of western access to O’Hare and improving transportation options to and from the airport.

Since Mayor Emanuel took office, the CDA has started or completed several major improvements at O’Hare that are benefiting travelers and generating additional jobs and revenue for Chicago. A $26 million transformation of International Terminal 5 into a world-class dining and retail destination was completed in 2014 and O’Hare became the first U.S. airport to launch the award-winning Automated Passport Control system. Construction is underway on a $782 million intermodal development project that will consolidate rental car operations, create new public parking and extend the airport’s people mover system. Also underway is a critical cargo development project on the northeast side of O’Hare that will improve airport infrastructure, enhance competitiveness, and create thousands of construction and permanent jobs.

The Mayor also announced that negotiations have begun for an airport use and lease agreement with airlines operating at O’Hare that contemplates new air service. This agreement will be finalized in 2018.