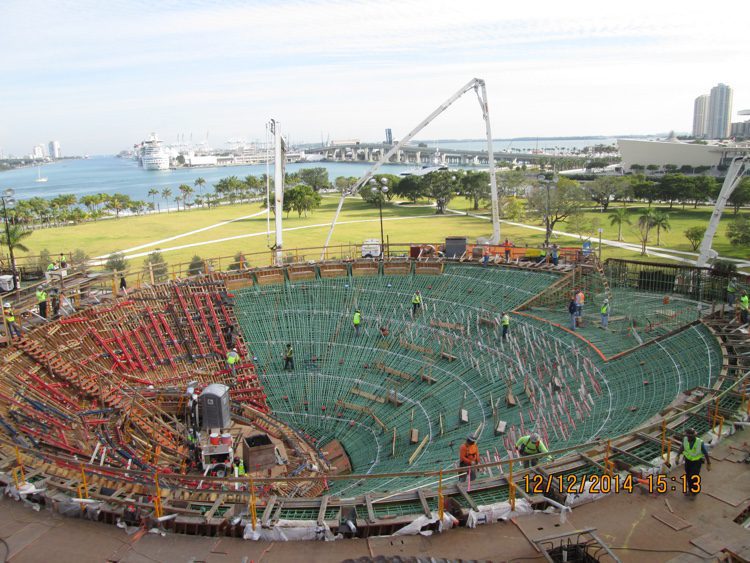 Integration of geometric modeling, structural analysis and machine automation are advancing what’s possible in concrete design and construction, and the conically-shaped Gulf Stream Aquarium at the Patricia and Phillip Frost Museum of Science in Miami, Fla., is an excellent example. The saltwater aquarium tank was designed to replicate the Gulf Stream, with a lot of science going into the design of the structure’s shape and its systems. Getting from an idea on paper to actual construction was the gap that needed to be filled.

The tank posed some interesting challenges that were addressed with a model-driven approach for the offsite digital fabrication of custom concrete formwork. Although the job could have been completed by a team of carpenters in the traditional way, a digital approach with offsite manufacturing greatly reduced the construction time and the amount of materials while increasing the quality of construction.

CW Keller + Associates (CWKA), a fabrication and engineering collaborative specializing in woodworking and concrete formwork, was responsible for modeling and manufacturing the formwork system for Baker Concrete Construction, based on the geometry developed in the design phase by Grimshaw Architects. Simpson Gumpertz & Heger (SGH) worked directly with CWKA on the engineering of the custom form system, balancing structural requirements with material expertise to develop an approach that met requirements and efficiently achieved the design intent.

“If we didn’t exist, and if Baker had gone at this with 2×4’s and plywood, they could have created the geometry,” says Shawn Keller, CEO of CWKA. “Our argument is that it would have taken them 10 times as much labor in the field to be able to hand cut, fit and frame the cone shape.” 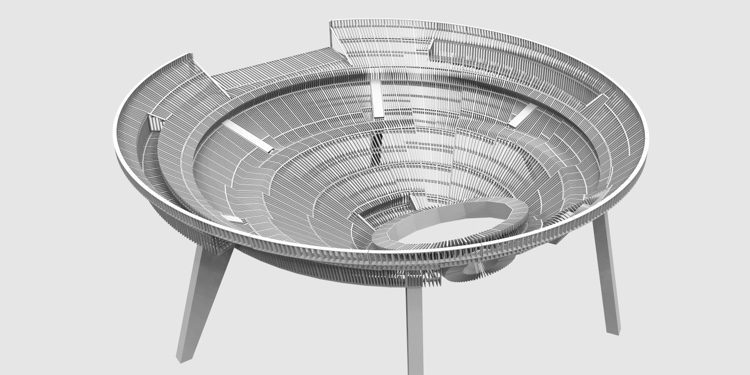 This full view of the formwork model illustrates all the boxes and ribs of the forms without the liner applied. 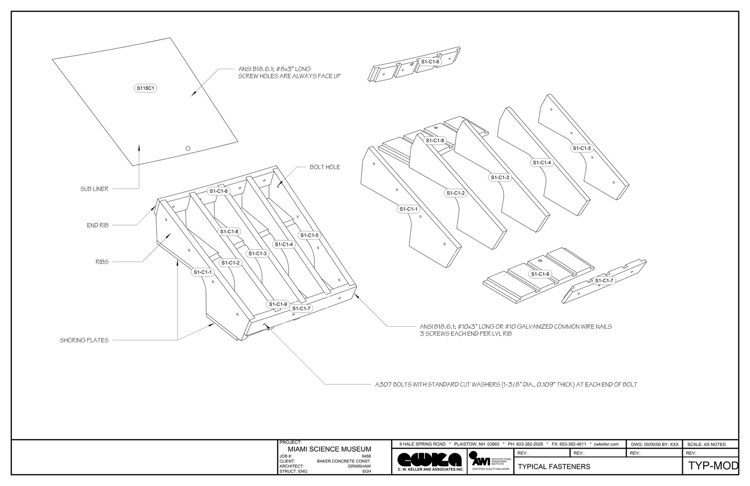 This output schematic of one of the form’s components was created directly from the digital model.
CREDIT: CW Keller + Associates

To begin the formwork process, the team took the on-paper architectural and structural engineering documentation to recreate the tank’s geometry in a comprehensive 3D model. They had to build a master model of the concrete surfaces to build a fabrication-tolerance model for the form system.

“One of the big efforts is collectively figuring out how to discretize the volume of formwork into individual pieces,” says Matt Johnson, principal at SGH. “Our engineering role is to look at the available materials and work with CWKA on ideas to create the formwork. We do the analysis on individual pieces and larger assemblies to assess sizes, spacing, connections and critical design elements.”

To drive the computer numerical control (CNC) machine and do the finite element analysis on components, the model has to be of high quality with good geometric accuracy, which isn’t always the case with BIM models built for 2D drawing production. 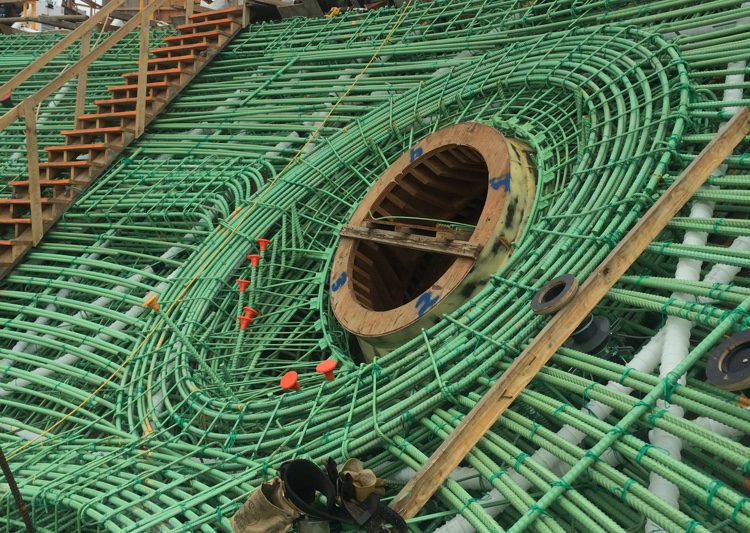 This porthole was one of two elements that were pre-assembled given their size and complexity. All other elements of the formwork were sent as kits of components. CREDIT: Baker Construction

In the modeling process, the team found rounding errors between the architectural and structural drawings that resulted in work points that didn’t correspond with the design intent. It was determined through vetting of the geometry back to the paper documentation that one team had set the rounding tolerance in AutoCAD at 1/16th, and the other team had set it at 1/8th.

“Once we create the model, if it doesn’t close as geometry, then we can see there is a problem,” notes Keller. “So the model becomes a valuable tool in resolving discrepancies in the design packages to ensure that what’s going to be made is accurate and fits.”

It’s rather common to discover discrepancies between architectural and structural work packages, and after these were resolved, the formwork modeling moved forward. Although there’s a lot of reliance on the model, there also are many steps to check and verify that the model is correct. 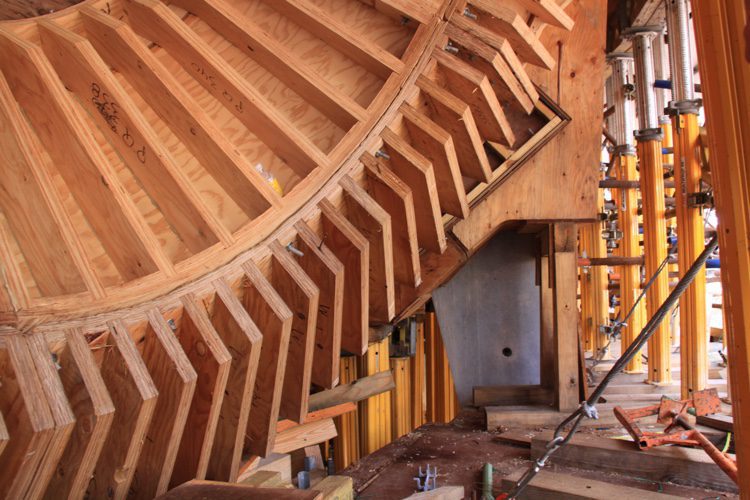 This image of the underside of the forms shows the complexity of the interlocking pieces as well as the placement of the formwork scaffolding. CREDIT: CW Keller + Associates

Given CWKA’s location in southern New Hampshire, it wasn’t cost-effective to preassemble forms and ship them across country. Instead, they developed a system of elements they could manufacture to be shipped and assembled onsite.

“The goal is to take complex geometry and machine kits of parts that will easily go back together with standard sets of tools that carpenters in the field are used to using,” adds Keller.

In addition to all the details for each of the more than 7,500 individual pieces of formwork, the model includes precise positioning for the shoring system that holds up the form.

“Our form system is like the paper lining you use when making cupcakes,” notes Keller. “The shoring and staging system that PERI constructed is the metal pan that does all the heavy lifting structurally. The form bridges between that structural system to the underside of the concrete to create the complex geometry of the underside of the tank.”

In addition to modeling all the components, there also was a lot of modeling for the details of the assembly and its construction sequence. Intelligence in the form components added simplicity for assembly, including joinery that self-stabilizes so fewer screws or nails are needed and no prefabricated or custom metal joinery is required. The way slots are cut ensures there’s only one way that it can be pieced together to help eliminate assembly mistakes. 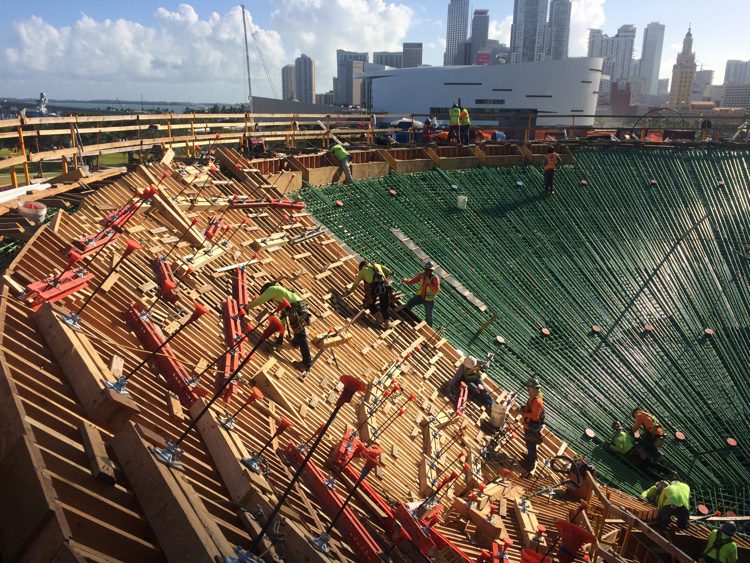 Most of the conical tank is shallow, but approximately one-third of the tank has a 40-degree slope that required a top form. CREDIT: Baker Construction

The conically-shaped tank is actually doubly-curved; the angle between vertical and the underside of the tank varies as one would circumscribe the tank. The formwork was made up of many connecting boxes, consisting of ribs, sills, and roll-resisting plates. The plates had complex geometry to deal with the loads, and required ever-changing angled dados in the end plates to achieve the doubly-curved conical shape of the tank. Modeling each individual box was achieved with a degree of automation.

“We use a software program called Rhino 3D and a plugin to that program called Grasshopper that allows us to automate a lot of the process,” says Keller. “Because we’re doing very similar things to design, engineer and then cut out parts, once we’ve developed the rules around how the form system is going to work, we can automate that process into a series of programs or scripts.”

The scripts help handle many repetitive tasks, such as generating the screw holes on a part that match up with the screw holes in its neighbor for connecting the two sections together. Scripts also help track each component in the overall reference system for machining and labeling the parts, and later assembling them.

CWKA used 4- by 12-foot sheets of laminated veneer lumber (LVL) at 1 ½-inch thickness to machine the parts. The software is used to design each part as well as nest the ribs and parts into the larger sheets to be cut by the CNCs for minimal waste material. After cutting, the parts are sorted, labeled and palletized into kits that are shipped to the site.

CWKA pre-machined the liner sheets in addition to the ribs and end plates. The goal was to eliminate any cutting of components in the field. Aside from two portholes that were pre-assembled due to their complexity, the formwork for the tank was sent down as component parts. 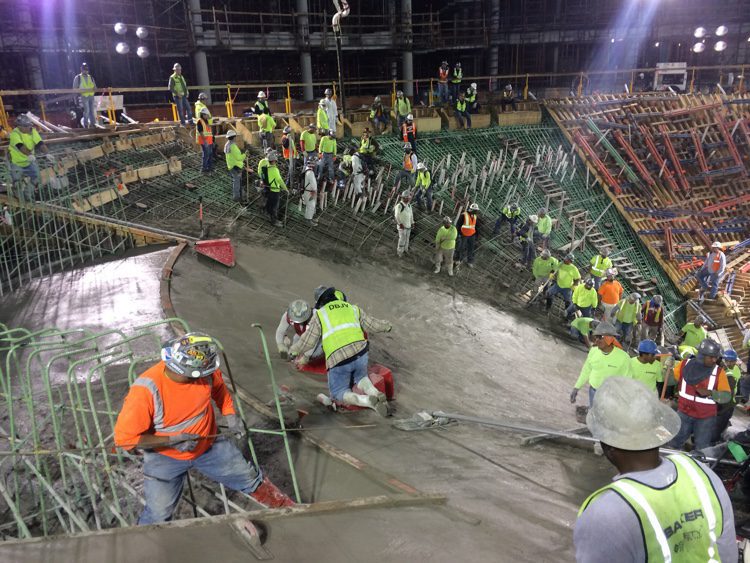 The concrete for the tank was laid in a continuous 30-hour pour. CREDIT: Baker Construction

The construction team fabricated sections of the form adjacent to where they would be placed, and these assemblies then were craned up, set on the staging system and connected to their neighbors.

The shoring system is pre-established in the 3D model, so PERI knew where to set all the locations and heights of the staging system, so locations correspond with the underside of the frames. Through a series of steps, the forms and shoring system are assembled to achieve the tank’s complex geometry.

Recognizing that the forms were going to be onsite for some time in a humid environment with a lot of wood that was going to expand, the design included space for expansion.

“We divided the tank into 18 pie-shaped pieces, and if you look at the 3D model, you can see there’s a main line that runs through in two places,” explains Keller. “We put a half-inch space between the ribs along those lines, so as the team was working their way around, they had that as a gap they could either close or expand as needed.”

One of the nuances unrecognized until forms were sent was how the legs meet the tank’s underside. They needed to twist, but they were cast as an orthogonal rectangle without the twist, which meant that the outside corners of the legs were going to be beyond the structural ring beam.

“We were able, through a series of site surveys and laser scanning, to identify where those legs landed and update the geometry of our model to allow the ring beam to get slightly wider to allow for the larger geometry of the leg,” says Keller.

In surveys after the concrete was cast, the tank’s overall circumference and diameter was roughly an inch larger than anticipated. The entire assembly had swollen and grown slightly due to wet weather, but it was still well within the tolerance needed for integration with the building.

“The forms were placed during the month of August, which ended up being one of the rainier Augusts the Miami area has seen,” notes Keller.

The engineered wood components did expand, but the expansion would have been much greater if standard dimensional lumber were used for the formwork.

The entire process took just less than two months to cut all the parts. The team in the field took less than a month to assemble the parts, and it noted that the time could have been cut by a week if it had been familiar with the system. The speed of assembly was impressive, as the team had budgeted between three and six months for assembly. 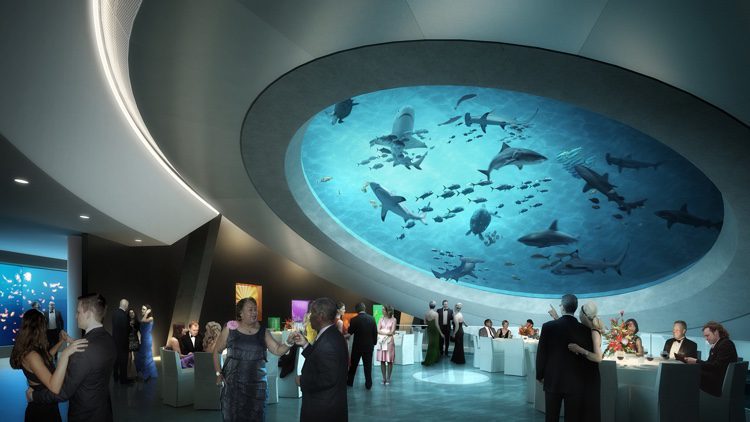 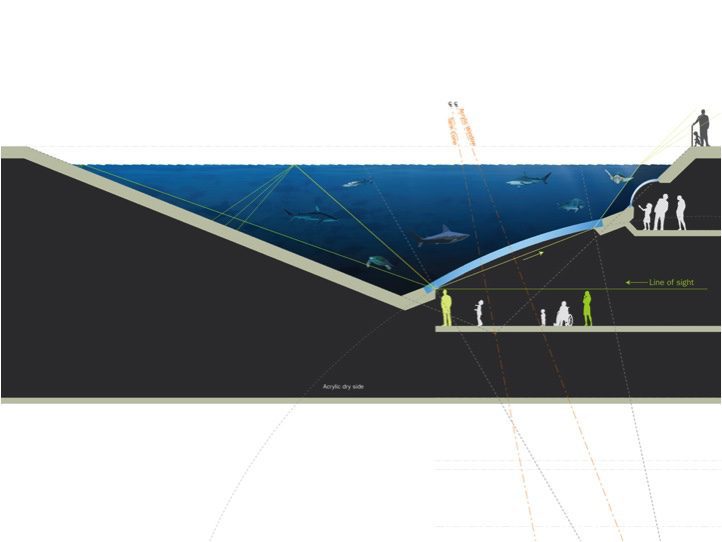 Word of mouth has been an effective marketing tool to spur further projects for the team of CWKA and SGH. The duo currently is working on a similar process for the Sixth Street Viaduct replacement project in Los Angeles, which is a ¾-mile cast-in-place bridge.

“We see a real opportunity in the industry to take what we’ve learned as a woodworking company in terms of automation of the process, engineering, 3D modeling and the ability to efficiently output complex concrete geometry,” says Keller. “There are further tools that we can use, such as machining billets of urethane foam with epoxy coatings to create very complex surfaces, that wouldn’t be possible with other fabrication techniques.”

This new approach is a bit of a mission for this duo, including a vision for digital direct-to-fabrication, which would do away with the intermediary step of creating paper drawings.

“Concrete, which is a liquid, can take any form within the laws of physics,” adds Johnson. “For a long time in concrete, you could do hyperbolic paraboloids that were materially efficient and gorgeous structures, but it was very labor intensive. As labor and material costs increased, those went away, and concrete became an orthogonal system with flat formwork and square vertical forms. Part of what we’re trying to do here is to free up designers to achieve concrete in elegant and beautiful forms to serve a purpose.”