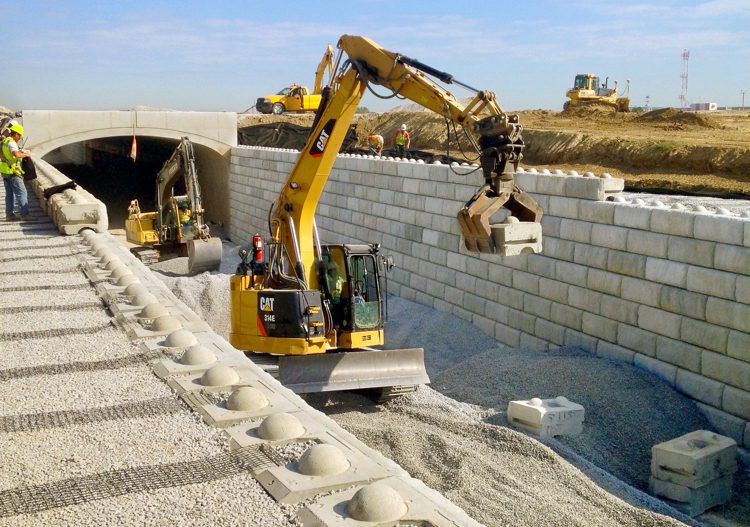 Charlevoix, MI — Redi-Rock International is pleased to announce the winners of the 2015 Rocky Awards! The Rocky Awards are an annual honoring of the best Redi-Rock walls built in the categories of Residential, Commercial, Freestanding, Water Application, and the People’s Choice Award which is chosen by the general public in an online vote. More than 130 Redi-Rock manufacturers across the world competed for these prestigious awards which were presented at the Redi-Rock Producer Meeting in New Orleans on January 22, 2016.

Redi-Rock of Kentuckiana of Mount Washington, KY was honored with Commercial Wall of the Year for the gravity and reinforced retaining walls they produced and installed at the Louisville International Airport in Louisville, KY. To extend a runway to accommodate a new Engineered Materials Arresting System (EMAS), 20,943 square feet (1945.7 square meters) of Limestone Redi-Rock retaining walls were used to reroute a security access road beneath the runway.

Wilbert Vaults of Houston based in Houston, TX was awarded Water Application Wall of the Year for the Pecan Lakes subdivision project. When the subdivision lost its flood protection due to FEMA remapping, officials designed a solution to protect the community and save $1 million in the process. A flood wall was built behind the neighborhood homes using the Redi-Rock gravity retaining wall system, which was then tested by a 100-year storm level shortly after the project was completed. The wall successfully stood up to the flooding despite parts of the wall being underwater for nearly a month.

Mid-Hudson Concrete Products Inc. of Cold Springs, NY was honored with Freestanding Wall of the Year for the freestanding walls they provided for the Mount Kisco Medical Center in Yorktown, NY. Redi-Rock Limestone texture gravity walls were installed to support grade changes for an access road to the site. Limestone texture freestanding walls were then built on top of the gravity walls to provide force protection, giving a seamless, high-end look to the development.

North Coast Marine Construction Inc. of Avon Lake, OH received Residential Wall of the Year for the Ledgestone texture gravity walls installed at a private residence on Lake Erie. The home owners wanted to take advantage of their lake front property, but the steep slope of the backyard made accessing the lake area incredibly difficult. Landscape designer, Doug Baldi of Baldi Design Solutions Inc. came up with a design incorporating curved walls, terraced levels, ramps, and stairs built with Redi-Rock.

Wilbert Precast of Spokane, WA was awarded the People’s Choice Rocky Award for a beautiful residential landscape upgrade project. The project used over 500 Cobblestone texture Redi-Rock gravity and freestanding blocks, as well as columns, steps and caps to accommodate the 8 foot (2.4 meter) grade change of the property and create a beautiful yard and pool area.

Redi-Rock International is the leading large block retaining wall system with 130 manufacturers across the globe. Massive, one-ton Redi-Rock blocks allow tall gravity retaining walls to be built without geogrid or tiebacks in many applications, and even taller reinforced walls are possible with the incredibly efficient Positive Connection System. Redi-Rock retaining walls capture the “Essence of Natural Rock” with quarried stone textures in Ledgestone, Cobblestone, or Limestone. For more information or to get a quote, visit www.redi-rock.com.