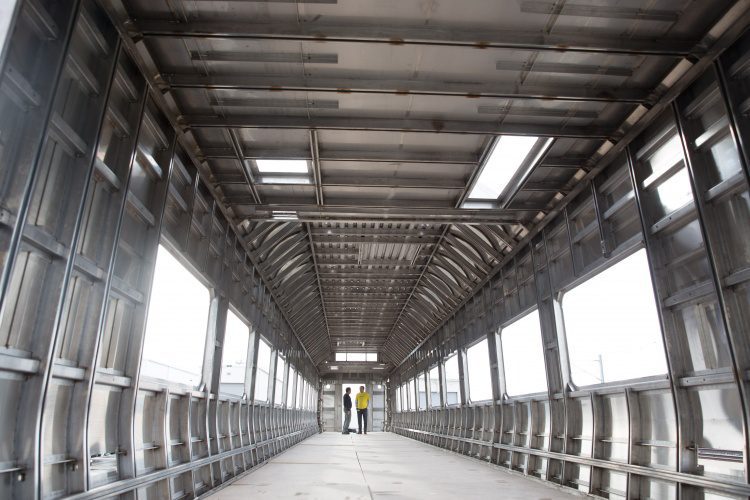 Sacramento, Calif., Jan. 26, 2016—Brightline and Siemens announced today that the first stainless steel passenger coach car shell for the new train service has been completed, reaching a major milestone in the construction of the trains. More than 70 employees at Siemens’ state-of-the-art manufacturing facility in Sacramento have worked on building this 85-foot long first coach car, using more than 50,000 welds to fuse it together.

Siemens is employing first-of-its-kind spot-welding technology to build the stainless steel coach car shells and these coaches will be the only carbody with a flat sidewall of this type in the U.S. market. The completed coach shell will now go through a finishing process, preparing it for final assembly.

“With the completion of the first coach car shell, we are bringing our vision for a truly unique train service that will transform travel in Florida one step closer to fruition,” said Mike Reininger, Brightline’s president. “The Siemens team has been working diligently and we are thrilled to mark this milestone as the finishing of this car progresses and the manufacture of additional cars continues.”

This coach shell is part of the first of Brightline’s initial five four-car train sets that will each carry 240 passengers with more train sets to follow as the service expands.

“We’re thrilled to be marking this production milestone with the Brightline team and also recognizing the highly-skilled work taking place at our Sacramento rail manufacturing plant,” said Michael Cahill, president of Siemens Rolling Stock. “Siemens has been successfully building America’s next era of innovative, high-performance and energy-efficient transportation solutions out of our Sacramento hub for decades, and we are excited to continue that tradition by employing the industry’s latest technologies and techniques to build these state-of-the-art trainsets for Brightline and its future riders.”

The Siemens Sacramento, CA manufacturing plant, which has been in operation for almost 30 years, is powered up to 80 percent by two megawatts of solar energy, currently employs over 800 people, and includes a recent 125,000 square-foot expansion to accommodate growing production needs. To support the skills needed for the advanced welding techniques being employed to build these trainsets, Siemens has launched a workforce development and training initiative partnering with local community colleges and the Sacramento Employment and Training Agency (SETA). Siemens has also developed a robust and diverse base of U.S. rail suppliers to support the next-generation of rail manufacturing for Brightline including components from more than 40 suppliers in more than 20 states with additional suppliers still being added.

Last week, Brightline poured the first concrete foundation for its Running Repair Facility in West Palm Beach, where the trains will be serviced and housed. Siemens will perform service and maintenance on the trains there. The facility is expected to be operation in August. Construction is also underway on Brightline’s train stations in Miami at MiamiCentral, Fort Lauderdale, West Palm Beach and Orlando.