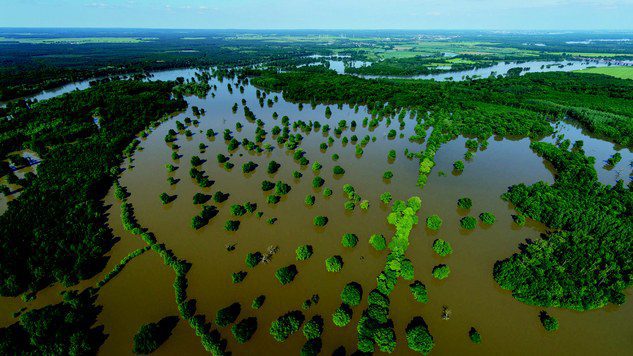 Floodplains once covered wide stretches along European rivers, but today only fractions of them remain. These ecosystems have an important role to play in reducing flood risks and are also the natural habitat of many endangered species. A new report by the European Environment Agency (EEA) provides an overview of significant floods in Europe and looks at the role of floodplains in flood protection, water management and nature conservation.

The floodplain is the area next to a river bed which is more or less frequently covered with water in times of high water discharges from adjacent rivers. Wetland is one type of floodplain. By retaining water, floodplains can buffer the effects of heavy rainfall and in this way protect economic activities and communities further downstream from flood damage. However, many former natural floodplains are under increased pressure from urban sprawl, infrastructure developments and agriculture. In Europe, up to 90% of floodplains have been lost during the past centuries or are no longer able to serve as functioning natural ecosystems providing flood risk reduction and habitats favouring a high biodiversity.

The EEA report ‘Flood risks and environmental vulnerability — Exploring the synergies between floodplain restoration, water policies and thematic policies’ draws upon information published in the European flood impact database which covers floods reported between 1980 and 2010. The report highlights the benefits of an integrated approach to flood risk management and argues that a coordinated implementation of EU legislation, such as the Water Framework Directive (WFD), the Birds and Habitats Directives and the Floods Directive through coherent measures and actions, would enhance the effectiveness of the policies.

The restoration of healthy ecosystems, for example through the Natura 2000 networks, is often a very effective way of preventing and mitigating floods. Even when ‘hard’ flood defences, such as dykes, are necessary to protect communities, those measures should be complemented with long-term nature-based solutions such as floodplain restoration. By ‘greening the grey’ and making a network of green infrastructures, the necessary protection levels can be combined with a minimum loss of habitats and a good preservation of ecosystem services.