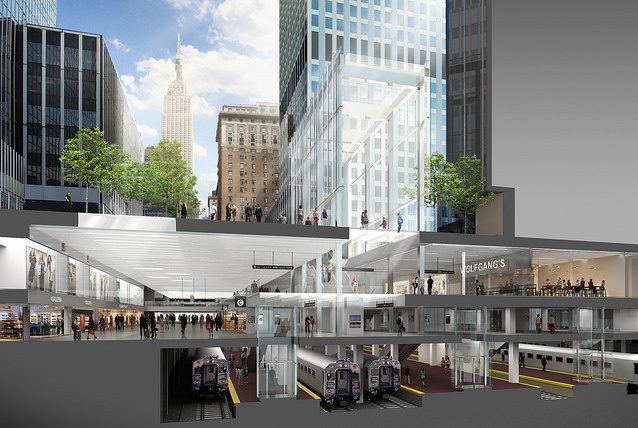 Governor Andrew M. Cuomo today kicked off the first phase of the transformational redesign of New York Penn Station and the historic James A. Farley Post Office. Governor Cuomo, alongside Empire State Development, Amtrak and the Metropolitan Transportation Authority, issued a joint solicitation to developers for the redevelopment, design and construction of the these two facilities as part of the Empire Station Complex – a world-class transportation hub, complete with significant passenger improvements and best-in-class amenities, to dramatically improve the overall passenger experience.

“For too long Penn Station has been outdated and overcrowded, serving as a blight on the greatest city in the world – we’re changing that, and we begin today,” Governor Cuomo said. “With the transformative redesign of Penn Station we are showing the nation that we will continue to think bigger and build better than ever before. By working together with the private sector, we will create a 21st-century transportation hub worthy of the Empire State and do it at a minimal cost to taxpayers. New York has always been built to lead and take bold steps toward the future, and I’m proud to say that legacy continues with the complete transformation of Penn Station.”

The joint solicitation includes a Request for Proposals for the Farley Building, and a Request for Expressions of Interest/Request for Qualifications for New York Penn Station. Applications are available on ESD’s website here. Responses are due by April 22, 2016. Artistic renderings of the proposed redevelopment are available here. Successful respondents to the solicitations will be required to commit to a 30% Minority and Women-owned Business Enterprises goal, which should include, but not be limited to, opportunities for MWBEs to serve as primary contractors, subcontractors, and other business opportunities relating to each project.

The RFEI/RFQ and RFP processes call for the simultaneous redevelopment of two historic projects: reimagining Penn Station through a series of renovations that will decrease congestion, add more space, light and air while improving retail offerings; and transforming the Farley Building into the Moynihan Train Hall, as well as a dynamic mixed-use development that includes office space, retail and possibly, a hotel.

The Penn Station RFEI/RFQ offers respondents the unique opportunity to propose concepts for improvement including leasing of the passenger concourses at Penn Station over the long term. Through such lease options with Amtrak and the MTA, respondents will have the opportunity to upgrade existing retail space and add additional retail space at the concourse level. Respondents are also eligible to make proposals regarding advertising opportunities within the Station. With 650,000 passengers traveling through Penn Station daily, potential long-term lease options provide a valuable incentive for developers to maximize proposed facility improvements.

The RFEI/RFQ calls for the redevelopment of both the upper and lower levels of Penn Station in ways that improve the passenger experience and enhance retail offerings. Respondents must propose privately-funded projects that will create more circulation space and new or enhanced retail and commercial opportunities.

The RFEI/RFQ seeks respondent teams with experience in large-scale commercial and retail development, as well as experience incorporating public transportation facilities into private development projects. Respondents will be asked to consider a number of design options focused on improving the overall travel experience at Penn Station, including:

The Farley RFP calls for the comprehensive redevelopment of the historic Farley Post Office Building, complete with two central deliverables:

1. Fixed-Price construction of the 200,000 square foot Moynihan Train Hall, including shops and restaurants that will sit under a new skylight on the building’s historic and architecturally dramatic steel trusses; and

2. Development of approximately 700,000 square feet of tech office and retail space with the potential for a new hotel.
The RFP calls for the completion of the Moynihan Train Hall by December 2018. When finished, the new facility will provide passenger services to LIRR and Amtrak customers; provide services for Air Train riders; and create a passenger concourse that will span from 7th to 9th avenues.

“The West Side of Manhattan has long deserved a world-class transportation hub, and thanks to the Governor’s visionary leadership, we’ll soon have one,” said ESD President, CEO & Commissioner Howard Zemsky. “This new complex will create thousands of jobs and ease the commutes of hundreds of thousands of people.”

“Amtrak appreciates Governor Cuomo’s leadership, vision and commitment to the expansion of passenger rail capacity in New York,” said Amtrak Chairman Anthony R. Coscia. “We are excited to engage with the development community in the solicitation process for the existing Penn Station, and look forward to drawing upon their creative expertise in developing concepts to improve the facility. An improved Penn Station and new Moynihan Train Hall benefit everyone who uses the station today by creating a greatly-improved passenger experience while also laying the groundwork for increased train capacity. These are the necessary first steps to prepare the Empire Station Complex for the growth that will come from a new tunnel under the Hudson River and the development of Penn South under the Gateway Program.”
“MTA Long Island Rail Road customers have long deserved a better experience than the underground warrens of today’s Penn Station, and Governor Cuomo’s plan for a re-imagined Empire Station Complex will bring real improvements to everyone who uses the busiest train station in North America,” MTA Chairman and CEO Thomas F. Prendergast said. “Thanks to the Governor’s LIRR Expansion project and his push to build four new Metro-North Railroad stations in the Bronx, more New Yorkers than ever will rely on this station – and today’s news means they will get the world-class Empire Station Complex they deserve.”

The original Pennsylvania Station first opened in 1910, with its original underground areas still in use today. In its current form, the station is designed to accommodate 200,000 daily passengers. In practice, it is the busiest train station in North America, serving more than 650,000 commuter, intercity and transit passengers every day, and is plagued by widespread pedestrian congestion and outdated facilities. The governor’s proposal will address these current shortcomings and transform the facility into a modern, iconic gateway to New York that is capable of meeting the demands of increased ridership in the 21st century.

The construction cost is estimated at $3 billion, with $2 billion projected for the concurrent redevelopment of Farley Post Office and Penn Station. An additional $1 billion is projected to be spent by developers renovating the Farley Building for destination retail and office space. Of the total projected cost, $325 million will come from government sources, including USDOT, the Port Authority, and Amtrak. The majority of the work will be funded through private investment, in exchange for an interest in the long-term revenue stream generated by retail and commercial rents.

Construction is already underway to create the first concourse west of 8th Avenue, which will provide direct access to LIRR and Amtrak tracks and connect the future Moynihan Train Hall to Penn Station underground via 33rd Street. New plazas and street level entrances into the Farley Building on either side of the monumental staircase will provide access to this new, lower concourse and speed boarding and exiting for passengers when the project is completed in September 2016. More than 300 workers are now on site each day fitting-out the new lower concourse in preparation for its opening next fall. Renovations to Penn Station and redevelopment of the Farley Building are expected to begin after that work is completed.