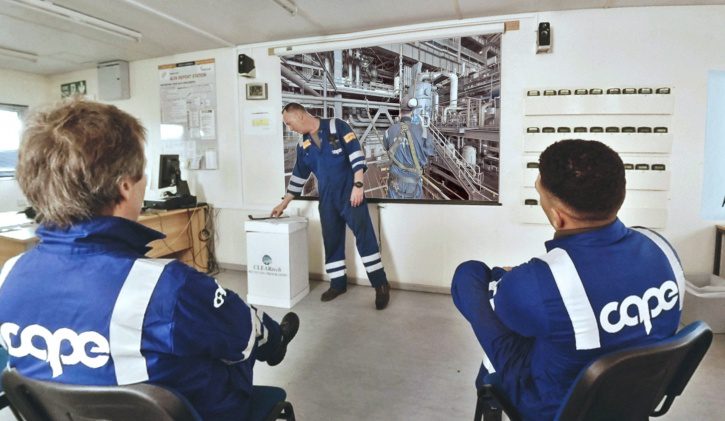 “When people are working in the same environment for long  periods of time,
their perception of risk can be lowered,” commented Marc  Allert, Risk
Coach at Cape. “They can even lose respect for the hazards they  face every day.
In order to counter, this we wanted to create something  completely
different.

“Working with Arithmetica, we have been able  to revolutionise our health
and safety training. The use of 360-degree imagery  of a real working
environment presented using Virtual Reality technology is  having a genuine impact
on trainees throughout the organisation. We are now  looking to widen the
scope of our training programme and even offer this  solution to our customers
and partner organisations as a  service.”

Working alongside Cape personnel, Arithmetica, with  support from sister
company Transmission TX which provided its 360 video  production expertise in
turning Cape’s storyboard into the immersive training  tool, captured 360
degree video of the Eggborough Power Station over a period of  two days.
Arithmetica processed the raw 360 video footage and, in conjunction  with
feedback from Cape, delivered a fully interactive 360-degree visualisation  of the
environment from the perspective of a member of staff working on site. A
commentary from Cape was added to the video to draw attention and focus to
specific features and working practices.

In order to deliver the  solution to multiple personnel, Arithmetica also
developed VR software for Cape  so the resulting experience could be
delivered in an interactive and immersive  way, using Samsung GearVR headsets in a
classroom or lecture theatre environment  whilst giving the trainer full
control of the training experience.

“To date we have trained several hundred members of staff using  the
SphereVision solution,” continued Allert. “The feedback has been unanimously
positive, as relevant messages are communicated in a realistic, hard-hitting
way  yet still easy to comprehend.”

Cape is a leading player in the  provision of critical industrial services,
such as the traditional services of  access, insulation, coatings and
mechanical, and a range of specialist services  including oil and gas storage
tanks, heat exchanger replacement and  refurbishment, and environmental
services, to the energy and natural resources  sectors. With safety a top priority,
Cape invests significant resource into  training, providing all employees
with relevant technical and safety training in  a format suited to specific
needs.

SphereVision is Europe’s leading brand for spherical and  360 degree video
solutions. 360 video systems are able to record a real-world  environment in
all directions at the same time, capturing every aspect of the  scene in
one go. When the video is played back – on a laptop, mobile device or  over
the Internet, viewers can pan around the image, moving through and  exploring
the site as if they were there. Footage can be integrated with floor  and
site plans using the company’s innovative software, and the high-resolution
360 imagery can also be integrated with online mapping.
www.spherevision.com

Arithmetica is an innovator in 360-degree imaging solutions and  automated
laser scanning data processing software. Located at the world famous
Shepperton Studios near London, Arithmetica is the company behind SphereVision
and Pointfuse. Arithmetica is an inventive software house that develops ground
breaking software solutions to solve real world scientific, medical and
engineering problems. Arithmetica builds on more than thirty years of
television  and film production to develop software for clients around the world.
Arithmetica solutions handle complex data rich information and are simple
and  easy to use.

Cape is an  international leader in the provision of critical industrial
services  principally to the energy and natural resources sectors. Cape
provides a  multi-disciplinary service offering including the traditional services
of  access, insulation, coatings and mechanical, and a range of specialist
services  including oil and gas storage tanks, heat exchanger replacement
and  refurbishment, and environmental services. Cape employs over 17,000
people  working across 21 countries, and in 2014 reported adjusted revenue of
£698.3  million.