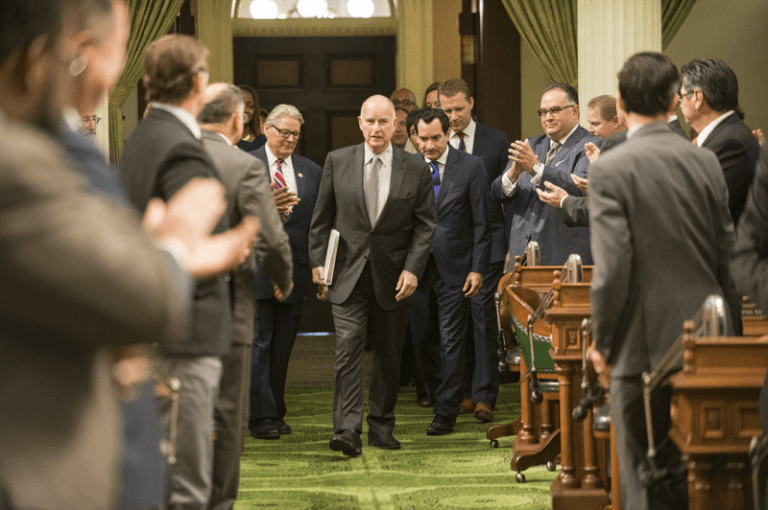 Governor Brown of California delivered the annual State of the State address yesterday. The talk singled out infrastructure spending, the Water Bond and climate change as long-term priorities, among others.

The Governor vowed to “focus on how we pay for the commitments we have already made,” invest in “ways that will not lock in future spending” and keep California “prepared and vigilant” for a “profoundly uncertain” future.

Below are his remarks related to the infrastructure audience:

Another long-term obligation we have to face is our deteriorating infrastructure. From state office buildings here in Sacramento to levees and facilities in our parks, universities, prisons and state hospitals – serious deficiencies abound. In this year’s budget, I am proposing that we use $2 billion of our temporary surplus on one-time investments to repair and replace aging structures. Neglecting what we have built over many years and letting it further deteriorate makes no sense and will just pile up costs in the long run.

But that is not all. Our overall state deferred maintenance is staggering, estimated to total $77 billion. Most of that is in our roads, highways and bridges. Here is our challenge: We have no choice but to maintain our transportation infrastructure. Yet, doing so without an expanded and permanent revenue source is impossible. That means at some point, sooner rather than later, we have to bite the bullet and enact new fees and taxes for this purpose. Ideology and politics stand in the way, but one way or another the roads must be fixed.

One of the bright spots in our contentious politics is the joining together of both parties and the people themselves to secure passage of Proposition 1, the Water Bond. That, together with our California Water Action Plan, establishes a solid program to deal with the drought and the longer-term challenge of using our water wisely. Our goal must be to preserve California’s natural beauty and ensure a vibrant economy – on our farms, in our cities and for all the people who live here. There is no magic bullet but a series of actions must be taken. We have to recharge our aquifers, manage the groundwater, recycle, capture stormwater, build storage and reliable conveyance, improve efficiency everywhere, invest in new technologies – including desalination – and all the while recognize that there are some limits.

Achieving balance between all the conflicting interests is not easy but I pledge to you that I will listen and work patiently to achieve results that will stand the test of time. Water goes to the heart of what California is and what it has been over centuries. Pitting fish against farmer misses the point and grossly distorts reality. Every one of us and every creature that dwells here form a complex system which must be understood and respected.

Besides the immediacy of the drought, there is the overarching threat of a warming climate. Incredibly – though last year was the hottest on record – there are still those, particularly in Washington, who are in denial. But even the deniers can’t deny the carbon pollution that exists all over the world. It is causing serious injury and respiratory disease to people of all ages, but especially the young and very old.

Thankfully the rest of the world has heard the message: Humankind must change its ways and radically decarbonize the economy.

The Paris climate agreement was a breakthrough and California was there leading the way. Over 100 states, provinces and regions have now signed on to our Under 2 MOU. The goal is to bring per capita greenhouse gases down to two tons per person. This will take decades and vast innovation. But with SB 350, we’re on our way.

Finally, we know that in life, disasters happen. Fires, floods, earthquakes – they will occur and we must be prepared to respond. That too – by the way – requires that we save and maintain a solid reserve.