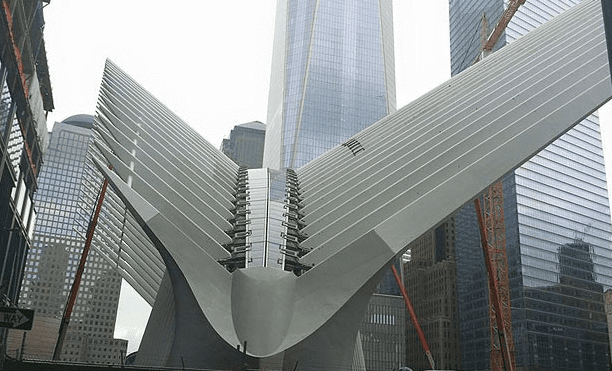 The Port Authority announced today that the World Trade Center Transportation Hub Oculus – the iconic centerpiece of the sprawling transit facility – will open in the first week of March. The opening will provide a greatly enhanced commute for the 100,000 weekday PATH riders who travel through the station, with quicker, climate-controlled access to the Wall Street area and other destinations to the north and south of the site.

The Oculus – with its soaring wings designed by Santiago Calatrava – will enable travelers to have a seamless connection with 11 New York City subway lines and the East River ferries in addition to access to PATH trains.

When the Oculus opens, PATH commuters will take new underground passageways to One World Trade Center, 4 World Trade Center, the corner of Liberty and Church streets a few blocks from Wall Street and to Vesey Street on the northern edge of the site. The new facility contains state-of-the-art escalators and elevators for convenient vertical circulation between the trains and street level.

The Westfield mall shops located throughout the Oculus and in the adjoining passageways are anticipated to open in phases starting in the spring.

“More than a decade ago, planners envisioned a rebuilt transportation complex on the World Trade Center site that would provide critical links between various modes of transit for the first time. By later this year, this vision will become reality,” said Port Authority Chairman John Degnan. “When the Oculus opens, commuters, visitors and residents of Lower Manhattan will have a greatly enhanced commute to and from the site for the first time.”

“The Port Authority has a rich tradition in pushing the envelope and being the premier master builder in the region. The rebirth of the World Trade Center and the construction of the Transportation Hub touched not only Lower Manhattan, but the rest of the country and the world as well. We can all stand in awe with what has been accomplished here,” said Port Authority Vice Chairman Scott Rechler.

“The Hub will be a vibrant transit center and tourist destination with an extensive transportation network in the revitalized Lower Manhattan,” said Port Authority Executive Director Pat Foye. “This year, tenants, commuters and visitors will enjoy easy access to the World Trade Center Transportation Hub’s first-class shopping, dining, and amenities, and also provide them with a first-class, convenient transit trip to and from the site.”

“This project is a testament to the spirit of New York City, and our commitment to rebuilding and providing improved public transportation connections for everyone who lives, works or visits Lower Manhattan,” said Federal Transit Administration Acting Administrator Therese McMillan. The Federal Transit Administration has agreed to fund approximately $2.872 billion of the World Trade Center Transportation Hub, more than half of the total cost of the project.

The transportation hub will serve as a 21st century state of the art transit center in the heart of Lower Manhattan, now a thriving 24-hour business and residential community. The World Trade Center Transportation Hub will conveniently connect visitors to 11 subway lines, PATH, Battery Park City Ferry Terminal, the World Trade Center Memorial site, One World Trade Center, Towers 3 and 4 and a future Tower 2, and Brookfield Place. It will represent the most integrated network of underground pedestrian connections in New York City.

When completed, the World Trade Center Transportation Hub will be the third largest transportation center in New York City, with ultimately upwards of 250,000 daily commuters and millions of annual visitors from around the world.

Founded in 1921, the Port Authority of New York and New Jersey builds, operates, and maintains many of the most important transportation and trade infrastructure assets in the country. The agency’s network of aviation, ground, rail, and seaport facilities is among the busiest in the country, supports more than 550,000 regional jobs, and generates more than $23 billion in annual wages and $80 billion in annual economic activity. The Port Authority also owns and manages the 16-acre World Trade Center site, where the 1,776-foot-tall One World Trade Center is now the tallest skyscraper in the Western Hemisphere. The Port Authority receives no tax revenue from either the State of New York or New Jersey or from the City of New York. The agency raises the necessary funds for the improvement, construction or acquisition of its facilities primarily on its own credit. For more information, please visit http://www.panynj.gov.