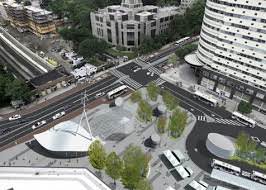 “We invested in the Fordham Plaza reconstruction because we knew the safety and mobility improvement would transform how people travel in and around The Bronx,” said U.S. Transportation Secretary Anthony Foxx. “In addition, the expanded public space ties the neighborhoods, retail district, and cultural institutions together to strengthen the vitality of the surrounding area.”

Altogether, the $33.9 million project to fully reconstruct Fordham Plaza received a $10 million TIGER grant and $7.2 million in other U.S. DOT funding. In addition to improving access to transit connections for thousands of daily bus and rail passengers, the renovated plaza will enable economic development in an economically distressed area of The Bronx. The remainder of the project was funded by New York City and New York State.

“The Fordham Plaza area has been called the worst intersection in the city, but with the help of federal funding it is now a safer, easier to navigate public transportation hub with more public space that can be enjoyed by all,” said McMillan. “We are proud to partner with New York City to improve public transit options in our nation’s top city for transit ridership.”

The project reconfigures circulation of 12 bus routes to benefit 41,000 daily bus users and the local neighborhood, enhances access to the MTA-Metro North station for 11,000 daily commuter rail passengers, and increases safety for 80,000 daily pedestrians in the area.  In addition, adjacent streets were modified to alleviate traffic congestion, enhance pedestrian safety and improve accessibility to the plaza for people with disabilities and mobility issues.

Since 2009, TIGER has provided a total grant amount of $4.6 billion to 381 projects in all 50 states, the District of Columbia, and Puerto Rico, including 134 projects to support rural and tribal communities. Program demand has been overwhelming; to date the U.S. DOT has received more than 6,700 applications requesting more than $134 billion for transportation projects across the country.