Arkansas Christmas Flooding Most Extensive in 25 Years on Some Rivers 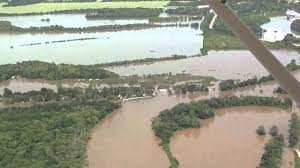 Significant flood peaks occurred across the Arkansas, White and Red River Basins in Arkansas beginning on Dec. 26 and the rivers are still high, according to the U.S. Geological Survey.

“The flooding that began Christmas weekend is the most extensive and severe flooding to strike some places, particularly the Arkansas River, since 1990,” said Jonathan Gillip, a USGS hydrologist in Arkansas. “Based on historical data, it appears that some of the most unusual floods, in terms of magnitude, occurred in the Arkansas River near Fort Smith, Dardanelle and Little Rock and its tributaries. This includes sites like the Fourche LaFave River near Gravelly and Flint Creek near Siloam Springs.”

Heavy rainfall of up to 10 inches in northern and western Arkansas fell during Christmas weekend and is still causing major flooding in some areas. Water levels increased at some locations by as much as 40 feet over the duration of the flood event. More than 30 streamgages in Arkansas operated by the USGS experienced a “top 10” flood, meaning this flood event was one of the 10 highest flood events ever recorded at these streamgages.  Most of these streamgages were located in the Arkansas and White River basins.

“Over the holiday, USGS field crews were out measuring historic flooding, some river sites were at levels we haven’t experienced in many years,” said Jaysson Funkhouser, a hydrologist with the USGS in Little Rock, Arkansas. “Preliminary calculations of the most extreme flood sites show that there’s only a 2 to 4 percent chance of exceeding this level of flooding in any given year (50 to 25 year floods).”

The following information describes the magnitude of these streamflows relative to historic floods:

Additional evaluation and field work will be required to finalize flood peak water levels, streamflow and the percent chance of the flood happening during any given year.

Streamgages operated by the USGS provide real-time information to emergency managers and the National Weather Service to assist with flood forecasting and to the U.S. Army Corps of Engineers where it is used for flood control. Regular communication between the three Federal agencies during flood events is crucial as each agency plays an important role in trying to minimize the adverse effects from floods on the public. River and stream levels at USGS streamflow gauging stations in Arkansas can be observed at the Water Resources of Arkansas website.

The USGS operates a network of more than 8,100 streamgages nationwide, with more than 170 located in Arkansas.