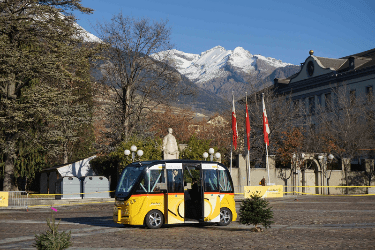 The fully autonomous, driverless and electric ARMA shuttles will be subject to two-phase testing.  The PostBus vehicles will initially be tested on a private, closed site through the spring of 2016.  Once pilot-testing is authorized, the two shuttles will be able to run on public roads in the Swiss town of Sion, the capital of the Canton of Valais, and carry passengers in autonomous mode.

French company  NAVYA,  specialists  in  driverless  technology, unveiled its first autonomous production vehicle in an exclusive world preview in late September.  The following week, the vehicle travelled on the open road for the very first time during the Intelligent Transport Systems World Congress (ITS) in Bordeaux.  The ARMA will transport up to fifteen people at a maximum of 25 km/h through the streets of the capital of Valais.

NAVYA ARMA steering systems make use of a multitude of technologies simultaneously: GPS RTK navigation devices, stereovision cameras, , inertial navigation systems and odometry, in addition to LiDAR.  Thanks to its sensors, NAVYA ARMA can position itself to within a few centimeters of its desired target and can identify all types of obstacles on the road – fixed, such as posts, and mobile, such as pedestrians — and signage, in both daylight and at night time.

“This is a turning point for our company and for autonomous technology,” said Christophe Sapet, President at NAVYA in Lyon.  “The system has been tested and now will be operational for the public.  Velodyne LiDAR is key to the 3D vision system for the ARMA electric and autonomous shuttles.”

“The NAVYA ARMA shuttles, and their deployment by PostBus, represent a major milestone for autonomous transportation,” said Erich Smidt, European Sales Director for Velodyne LiDAR.  “What is most remarkable is how these various technologies have matured and converged in a solution that is safe, convenient and available to all.  Velodyne LiDAR is the very essence of proven technology, having collectively logged millions of hours of use time in virtually every type of terrain and weather condition.  A new era truly is beginning.”

ARMA shuttles will enable transport specialists to look into how they integrate into public areas and enable them to test innovative modes of transport.  The aim is to offer an additional form of transportation on current routes to cover the needs of all users — in particular, those who live in areas not currently served by the public system.

NAVYA is a French company specialized in developing innovative, smart and sustainable solutions. NAVYA develops driverless, automated electric vehicles that are independent of all infrastructure. These vehicles are a smart mode of transport and are therefore for the benefit of all citizens and society.  The vehicle is equipped with a multitude of sensors and an embedded system that enables it to interact with its surroundings. It is also intended to provide efficient mobility solutions in terms of space and energy and has been built on sustainable intermodality and multimodality. NAVYA is supported by the “Robolution Capital” investment fund and presents an innovative and ambitious solution that has been developed to take up challenges laid down by today’s society. NAVYA benefits from major advances in technology in the driverless, electric vehicle sector thanks to ten years’ experience in the field and a highly qualified R&D team. Christophe Sapet, its CEO, is supported by a team of 30 people divided up between Lyon and Paris.

PostBus is the leading bus company in Switzerland’s public transport network. With over 3,700 employees and almost 2,200 vehicles at its disposal, PostBus carries more than 140 million passengers each year on 869 bus routes. Its trademark – the three-tone horn and the yellow Postbuses – are part of Switzerland’s cultural identity. The PostBus brand embodies the values of reliability, security, trust and development.

Founded in 1983 and based in California’s Silicon Valley, Velodyne LiDAR Inc. is a technology company known worldwide for its real-time LiDAR (light detection and ranging) sensors.  The company evolved after founder/inventor David Hall competed in the 2004-05 DARPA Grand Challenge using stereovision technology.  Based on his experience during this challenge, Hall recognized the limitations of stereovision and developed the HDL-64 Solid-State Hybrid LiDAR sensor.  Velodyne subsequently released its compact, lightweight HDL‑32E sensor, available for many applications including UAVs, and the new VLP-16 LiDAR Puck, a 16-channel real-time LiDAR sensor that is both substantially smaller and dramatically less expensive than previous generation sensors. Market research firm Frost & Sullivan has honored the company and the VLP-16 with its 2015 North American Automotive ADAS (Advanced Driver Assistance System) Sensors Product Leadership Award. Since 2007, Velodyne’s LiDAR division has emerged as the leading developer, manufacturer and supplier of real-time LiDAR sensor technology used in a variety of commercial applications including autonomous vehicles, vehicle safety systems, 3D mobile mapping, 3D aerial mapping and security.  For more information, visit www.velodynelidar.com.