/ Bridges / Chambly Canal’s Bridge No. 09, First of Its Kind in North America

Chambly Canal’s Bridge No. 09, First of Its Kind in North America 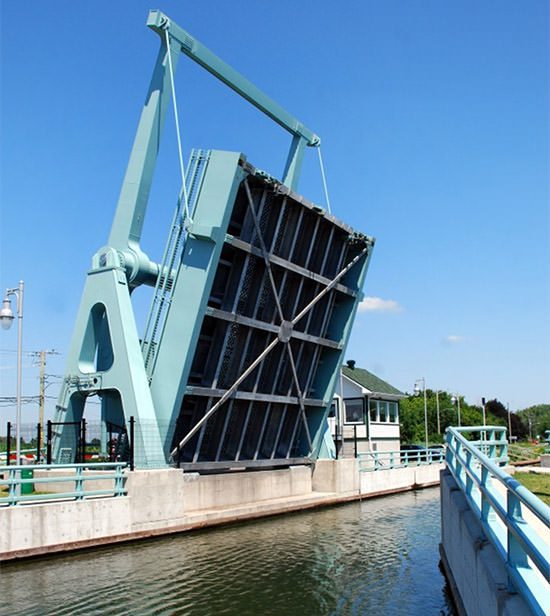 The Chambly Canal has been considered a national historic landmark since 1929. This waterway, located along the Richelieu River in the Montérégie region of Quebec, links Lake Champlain and the Chambly Basin. With 10 bridges and 9 locks, the site is now ideal for navigation and various tourist activities. Boats, cars, bikes and pedestrians can be seen travelling along the canal year-round.

When the Public Works and Government Services Canada (PWGSC) mandated WSP to replace the No. 09 Bridge, – the oldest bridge to cross the canal – WSP’s team could not have imagined how big of a challenge they were going to face. Likewise, the team had no idea that they would need to step out of their professional comfort zone like never before.

In August 2009, after reflecting on the five submitted concepts, PWGSC chose the boldest of designs, to everyone’s surprise. The selected design was the only one never yet experimented by WSP: a drawbridge using hydraulic cylinders. At the time, while WSP’s Transportation team had sound expertise in fixed bridges of all sizes, the group had never undertaken the design of such a drawbridge.

Shortly after the start of the design phase, many questions were still left unanswered;Tony Mailhot took advantage of this time to further contemplate the bridge design. The engineer, drawing on 15 years of experience at the time, pulled away to draw the bridge structure’s elements. It was essential for him to position the various elements properly within the restricted area in order to ensure their functionality, whilst defining a harmonious and structurally appropriate geometry. A number of preliminary calculations enabled the geometry to take shape. This was followed by the required structural and mechanical analyses. “The design process lasted two or three nights. The work then carried on with my team, based on a well-defined geometry and operating method,”revealed the project manager. His perseverant approach actually led to a new trajectory and mechanical balance equations, which ultimately enabled WSP to conduct compelling research and obtain development grants.

A new kind of drawbridge

For a drawbridge even more so than for a fixed bridge, the design process stages must be addressed with as much precision as possible. Bridge No.09 arching over the Chambly Canal has become a unique project thanks to its forward-thinking operating principle and hoist system. Its unique and celebrated geometry is a result of the confined space in which it had to deploy. Both for the client and WSP, altering the geometry of nearby roads and forcing expropriation to build the new bridge were never an option.

From a more technical point of view, the bridge should ideally have been able to open vertically so as to remain in its original axis. This is why WSP naturally opted for the idea of a weighbridge with two rotation points, fitted with a counterweight. Although this technique is still seldom used on our side of the world, it soon caught on for its flexibility to allow construction to occur in a limited amount of space. Bridge No.09 of the Chambly Canal is the first of its kind in North America.

A springboard for the future

“I am convinced that our team is driven by one thing only: passion.  All our team members are fascinated by bridges and I think that is what helped us overcome so many major challenges,” remarks Tony. Overall, the entire team enjoyed a good challenge. Its members have just recently completed the design of another drawbridge along the same canal. About three times the size of Bridge No.09, it will no doubt be considered as its big brother. This new bridge will be located upstream, at the other end of the canal, at level with the town center of St-Jean-sur-Richelieu. Construction is expected to start in 2016.

Congratulations to the entire bridge team, namely to the members who work at the Longueuil office, as well as the industrial mechanics, automation and control teams based in Quebec City; they carried out Bridge No.09 to perfection.