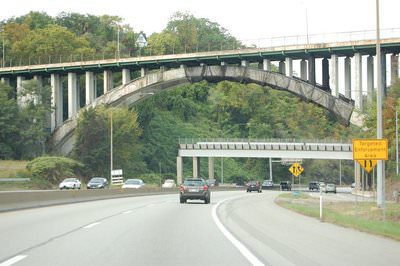 Michael Baker International, a global leader in engineering, consulting, planning, technical and professional services, is serving as the primary construction management and inspection services firm for the $17.5-million project to replace the former Greenfield Bridge in Pittsburgh.  The City of Pittsburgh closed the 462-foot structure to all traffic in October 2015. Michael Baker then oversaw construction activities that included the implosion, demolition and removal of the bridge last month, clearing the way for development of a new span that will sit above I-376/Parkway East.

Michael Baker experts in construction management and inspection are charged with ensuring timely, efficient, safe delivery of all phases of the new bridge, including new abutments, piers, steel arches and a new bridge deck. Plans for the new bridge include three lanes of travel for motorists, a bike lane and a sidewalk for pedestrians.

Throughout the company’s history, Michael Baker has established a legacy of responding to some of the toughest transportation challenges with innovative and sustainable bridge designs.  Landmark projects include the New River Gorge Bridge, the nation’s longest steel arch span located on U.S. Route 19 north of Fayetteville, West Virginia; and the Route 52 Causeway in Ocean City, New Jersey, a three-mile-long causeway that serves as a critical coastal evacuation route for the region. The company continues to demonstrate leadership in bridge design and construction through the use of high-performance materials and Accelerated Bridge Construction techniques.

Constructed in 1921 as one of seven concrete arch bridges in the city, the original Greenfield Bridge most recently carried nearly 12,800 vehicles daily. The span garnered national attention as one of 70,000 structurally deficient bridges in the United States.  Construction crews installed both a netting system and a temporary span under the bridge, which were engineered to capture any falling concrete and debris before they could reach passing vehicles below on the Parkway East.

The new bridge is expected to be completed by the end of summer 2017. When it reopens, it will be rechristened with its original name, the Beechwood Boulevard Bridge.