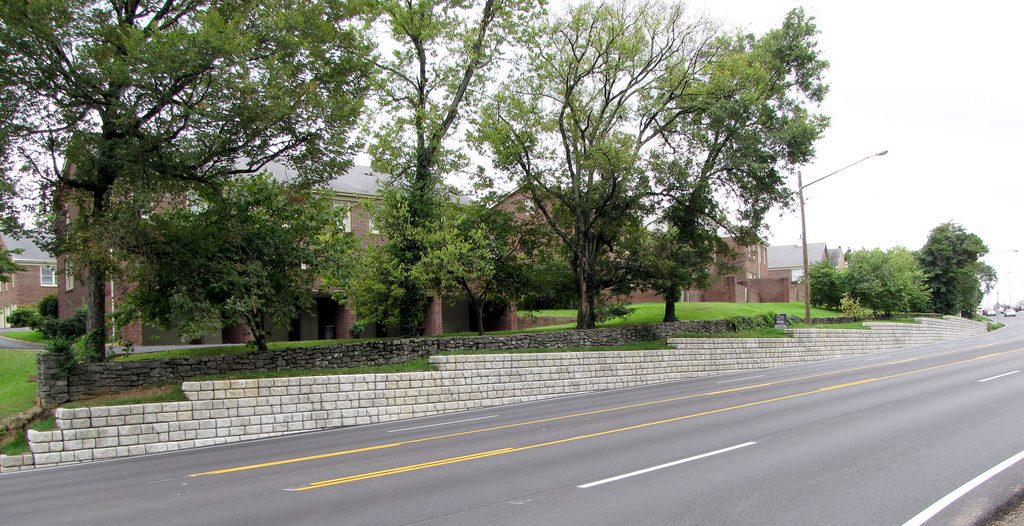 More than 40,000 cars travel each day along Hillsboro Pike, one of the busiest thoroughfares in Nashville, Tennessee. The road was originally designed without a left turn lane, which created an extreme amount of traffic backup-up to a mile long on busy days.

To expand the roadway, banks on the east side of Hillsboro Pike required extensive segmental retaining walls that would allow the Tennessee Department of Transportation to save existing landscaping and utilities while minimizing lane closures. In addition, they needed a retaining wall that could be built directly in front of an existing stacked stone wall that TDOT did not want to dismantle. The only kind of retaining wall that was feasible for this site was a gravity retaining wall that did not need reinforcement.

Based on these requirements, TDOT selected Redi-Rock large block retaining walls systems, which is on the TDOT’s qualified products list. Soil Reinforcement Design, Inc. of Woodstock, Georgia engineered the Redi-Rock retaining walls to meet those needs. By harnessing the power of gravity, Redi-Rock’s one ton blocks rely on their mass to create tall gravity walls that require minimal excavation. The Redi-Rock blocks used in this project were manufactured at Architectural Wall Solutions only six miles from the job site. In addition, Redi-Rock Cobblestone texture blocks also provided an aesthetic appeal to the site.

“The retaining wall had to go in before they could widen the highway, so the amount of time it required to put in the retaining wall affected the time it took them to get to the paving operation,” said Jim Hammann, manager of Redi-Rock manufacturer Architectural Wall Solutions. “The ease of installation of the Redi-Rock system was definitely a factor in this project.”

For the project, engineers designed both walls as gravity solutions. The north wall stands 12.5 feet (3.8 meters) tall at its highest point and extends for 268 feet (82 meters). To build a gravity wall this high, the design required one course of Redi-Rock planter blocks which increased the setback of the wall and allowed the wall to be built higher. The south wall was designed to stand 7.5 feet (2.3 meters) tall at its highest point and 350 feet (107 meters) long. In many places, the face of the south wall was built within six feet (1.8 meters) of the face of the existing stone wall.

Because this is such a busy roadway, construction of the segmental retaining walls was allowed only between the hours of 9 p.m. and 6 a.m. and only one lane of traffic could be closed during that time. With only one lane of space to use as a construction area, Mountain State Contractor’s installation crew had to work closely with Architectural Wall Solutions to make the project progress smoothly.

“We did quite a significant amount of coordinating to make sure they had the blocks when they needed them and that we didn’t run out,” Hammann said. “Our plant was only 6.5 miles from the job site so we were able to make a turnaround from empty trailer to full trailer in about an hour.”

From start to finish, the wall installation took about two weeks. As the crew became more experienced with installing Redi-Rock, they were able to install 995 square feet (92 square meters) of wall in a particular single eight hour shift.