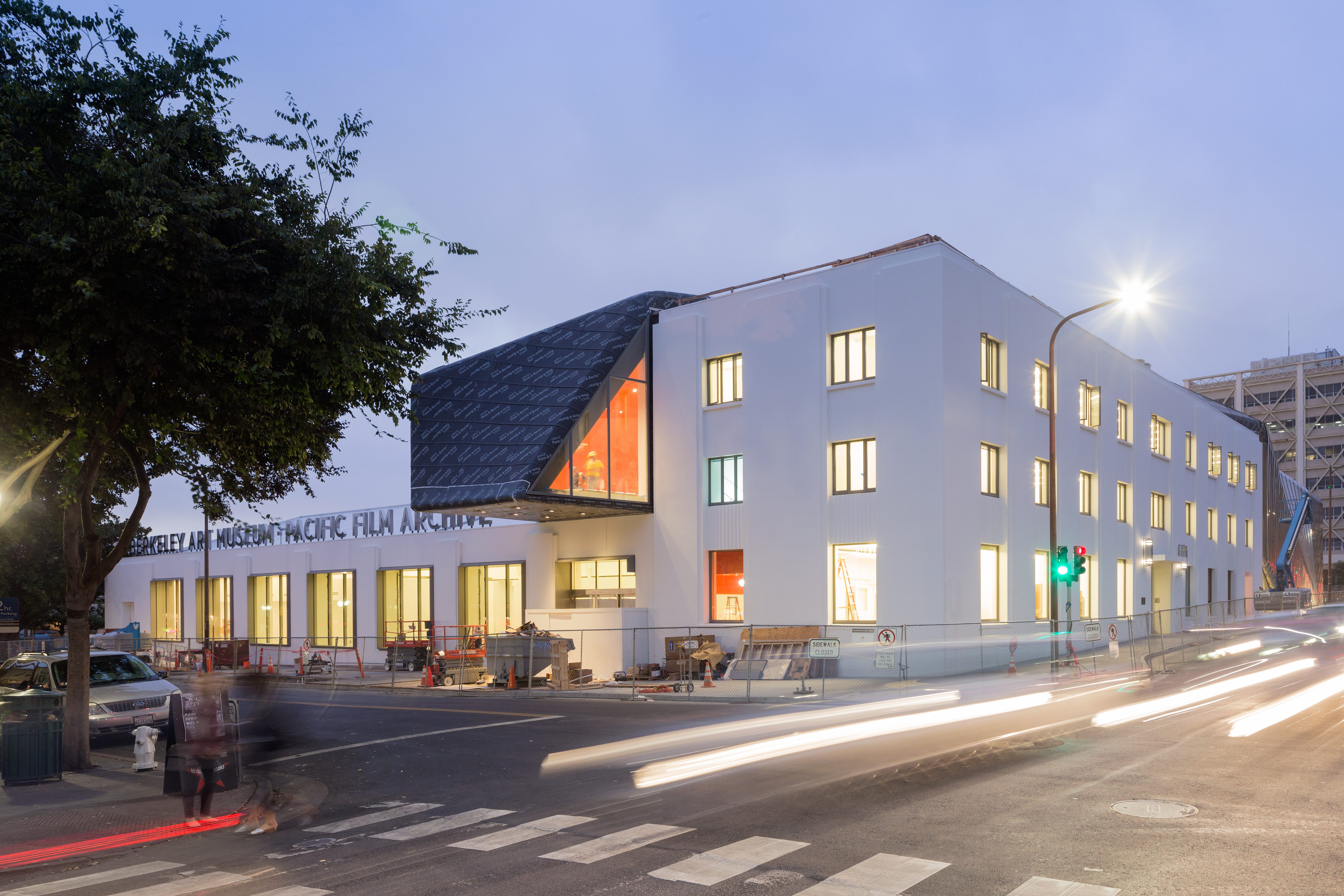 Berkeley, Calif., Jan. 11, 2016—The University of California, Berkeley Art Museum and Pacific Film Archive (BAMPFA) opens its new building to the public on Sunday, January 31, 2016, with an all-day open house; the first day of regular programming is Wednesday, February 3. The building was designed by Diller Scofidio + Renfro, known for such projects as the High Line elevated park in New York; The Broad museum in Los Angeles; and the Institute for Contemporary Art, Boston. Located in downtown Berkeley at the intersection of Oxford and Center Streets, directly across from the UC Berkeley campus, the new BAMPFA provides exemplary spaces for exhibitions and film screenings, as well as access to BAMPFA’s encyclopedic collections of art and film. In its new location BAMPFA will continue to be a major destination for art and film lovers, including students, local residents, and visitors from around the globe.

BAMPFA Director Lawrence Rinder comments, “The new BAMPFA will be the architectural and cultural centerpiece of downtown Berkeley. Combining serene spaces for viewing film and art with dynamic public areas, the building will inspire audiences for generations with its fresh, imaginative design and versatility.”

With its presentation of approximately 450 film screenings and up to twenty art exhibitions annually, as well as an extensive schedule of public programs and performances, BAMPFA will anchor Berkeley’s downtown arts district.

The versatile exhibition galleries accommodate an encyclopedic range of artwork. The primary film theater is equipped with state-of-the-art projection for all popular formats—including DCP, 35mm, and 16mm—highly sophisticated acoustics, and a world-class sound system from Meyer Sound.

Architecture
BAMPFA selected world-renowned interdisciplinary design firm Diller Scofidio + Renfro for the project because of its unique ability to connect institutions to wider urban and public contexts and its proven success in merging adaptive reuse of historic structures with dramatic new design in major urban cultural initiatives. DS+R’s design supports BAMPFA’s mission and enhances its ability to provide the community with exceptional art and film experiences. “The new home for BAMPFA leverages its location between downtown Berkeley and the UC campus by providing unprecedented visual and physical access to its programs for both visitors and casual passersby,” states Charles Renfro, partner at DS+R. “BAMPFA will become a new social and cultural hub for the entire region.”

“The design merges the old and new to create a permeable interface between the institution and the public,” Renfro continues. “The supple body of the new structure, draped between the original 1930s orthogonal buildings and snagged on their sharp corners, creates a dramatic public spine that begins as a cantilevered cafe marking the building’s entrance, and culminates in an indoor theater on the other end of the site. The sculptural form of the theater volume reinterprets the 1930s Art Deco style of the press building in a contemporary language of ruled surfaces and precision-formed stainless steel.” Meanwhile the original north-facing sawtooth roof of the printing plant is retained, providing indirect natural light to the art galleries within. At the Addison Street end, the new structure is integrated with a large outdoor LED screen and plaza for public screenings.

Special Features
Master woodworker Paul Discoe fabricated joinery elements that add natural warmth to the building. The craftsman built the stepped seating of the performance space, the admissions desk, and the counter and shelving units in the BAMPFA store using wood that was salvaged from the Canary Island pine trees that were removed from the building site prior to construction.

Windows along the Center Street facade of the former printing press building have been enlarged, allowing passersby to look into the building and see the Art Wall, a 60 x 25-foot interior surface that overlooks the multilevel performance space. BAMPFA will commission artists from around the world to create temporary murals on this monumental wall twice a year. For the opening, Chinese artist Qiu Zhijie will produce a site-specific work on the Art Wall inspired by the Chinese literati garden.

Babette, BAMPFA’s popular cafe, cantilevers over Center Street, offering sweeping views toward the Golden Gate and the Berkeley hills; it also provides glimpses into the galleries and performance space. A new feature of the cafe is an evening lounge, Swig’s, which will complement Babette’s offerings with a special food and drink menu. The cafe can be accessed without paying admission.

Architecture of Life
BAMPFA’s inaugural exhibition in the new building, Architecture of Life, explores the ways that architecture—as concept, metaphor, and practice—illuminates aspects of life experience: the nature of the self and psyche, the fundamental structures of reality, and the power of the imagination to reshape our world. The exhibition presents an international selection of over 250 works of art, architectural drawings and models, and scientific illustrations made over the past two thousand years. Architecture of Life occupies all of the gallery spaces in the new BAMPFA from January 31 to May 29, 2016.

The exhibition is organized by Rinder, who comments: “Visitors toArchitecture of Life will be able to engage with the breadth and depth of cultural experience at UC Berkeley.

BUILDING PROJECT BACKGROUND
A 1997 seismic survey determined that Woo Hon Fai Hall, BAMPFA’s former building, designed by architect Mario Ciampi (1907–2006), does not comply with today’s earthquake safety standards. Upgrading the building to code would have significantly altered the gallery spaces, drastically limiting the institution’s ability to present exhibitions. Furthermore, BAMPFA’s world-renowned film program, which had been housed in a theater in the Ciampi building until 1999, was moved off-site to a nearby annex due to seismic concerns. To address these issues, UC Berkeley and BAMPFA embarked on a campaign to create a new facility that would again house BAMPFA’s art and film programming under one roof. The $112 million project has been funded through a philanthropic capital campaign and private sources. BAMPFA’s public programming at 2626 Bancroft Way concluded on December 21, 2014. UC Berkeley will determine the future use of Woo Hon Fai Hall.

ABOUT BAMPFA
Internationally recognized for its art and film programming, the UC Berkeley Art Museum and Pacific Film Archive (BAMPFA) is a platform for cultural experiences that transform individuals, engage communities, and advance the local, national, and global discourse on art and film. Founded in 1963, BAMPFA is UC Berkeley’s primary visual arts venue with its screenings of some 450 films and presentations of up to twenty exhibitions annually. BAMPFA’s mission is to inspire the imagination and ignite critical dialogue through art and film.

The institution’s collection of over 19,000 works of art dates from 3000 BCE to the present day and includes important holdings of Neolithic Chinese ceramics, Ming and Qing Dynasty Chinese painting, Old Master works on paper, Italian Baroque painting, early American painting, Abstract Expressionist painting, contemporary photography, and Conceptual art. BAMPFA’s collection also includes over 17,500 films and videos, including the largest collection of Japanese cinema outside of Japan, impressive holdings of Soviet cinema, West Coast avant-garde film, seminal video art, as well as hundreds of thousands of articles, reviews, posters, and other ephemera related to the history of film—many of which are digitally scanned and accessible online.

ABOUT DILLER SCOFIDIO + RENFRO
Diller Scofidio + Renfro is an interdisciplinary design studio that integrates architecture, the visual arts, and the performing arts. The firm established its identity through theoretical and self-generated projects before working on significant architecture projects such as the redesign of Lincoln Center for the Performing Arts and the High Line, both in New York City, and The Broad museum, which recently opened in downtown Los Angeles. For their commitment to merging art, architecture, and culture, founding partners Elizabeth Diller and Ricardo Scofidio were the first in the field of architecture to be recognized with the MacArthur Foundation “Genius” award.

Today, the studio is led by four partners—Elizabeth Diller, Ricardo Scofidio, Charles Renfro, and Benjamin Gilmartin—who work collaboratively on the design of each project. Projects opening in 2016 include the Berkeley Art Museum & Pacific Film Archive at the University of California, Berkeley; the Columbia University Medical Education Tower in New York City; and the Museum of Image & Sound on Copacabana Beach in Rio de Janeiro, Brazil. Projects currently in design include Culture Shed, a start-up cultural institution in New York City’s Hudson Yards; the Museum of Modern Art (MoMA) expansion in New York City; and Zaryadye Park, a thirty-five-acre public space next to the Kremlin in Moscow. The studio’s installation and curatorial projects include Musings on a Glass Box in 2014 at the Fondation Cartier, Charles James: Beyond Fashion in 2014 at the Metropolitan Museum of Art, and The Art of Scent 1889–2012in 2012 at the Museum of Art & Design.