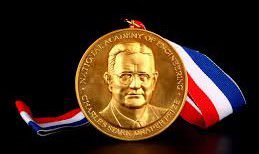 Washington, DC, Jan. 5, 2016—The National Academy of Engineering announced today that the 2016 Charles Stark Draper Prize for Engineering will be awarded to Andrew J. Viterbi “for development of the Viterbi algorithm, its transformational impact on digital wireless communications, and its significant applications in speech recognition and synthesis and in bioinformatics.” The $500,000 annual award is given to engineers whose accomplishments have significantly benefited society.

The Draper Prize will be presented at a gala dinner event in Washington, D.C., on February 16, 2016.

“Andrew Viterbi’s Viterbi algorithm has led to significant benefits to the health, safety, and well-being of the world’s citizens,” said NAE President C. D. Mote, Jr. “I am very honored to recognize him with this year’s Draper Prize. His work embodies the prize’s mission to recognize an engineer whose accomplishment has meaningfully impacted society.”

Andrew J. Viterbi developed the Viterbi algorithm as a method for enhancing error-correcting code used in telecommunication. His publication of the algorithm in the IEEE Transactions on Information Theory in 1967 helped to usher in the age of cell phones by focusing on only the most likely computing paths for telecommunication signals, ultimately making it easier to eliminate static in transmissions. The Viterbi algorithm has had the greatest impact in digital cellular phones—whether GSM, CDMA, TDMA, 3G, or 4G LTE, they all employ at least one Viterbi algorithm for channel decoding—but soon after its discovery, it was put to use in other applications such as cable, DSL modems, and Ethernet. The Viterbi algorithm has also been instrumental in interplanetary communication signals, allowing for greater signal strength in deep space missions such as Mars Pathfinder, Mars Exploration Rover and the Cassini probe to Saturn.

Andrew Viterbi is president of the Viterbi Group, which advises and invests in startups in the digital and wireless communication fields. As cofounder of Linkabit in 1968 and Qualcomm in 1985, he led the development of innovative technologies based on code division multiple access. In addition to his career in the communication industry, Viterbi was a professor at the UCLA School of Engineering and Applied Science from 1963 to 1973 and then taught part-time at the University of California, San Diego, where he has been professor emeritus since 2004. Viterbi received his Ph.D from the University of Southern California (USC), where he and his wife Erna Viterbi made a naming gift to rename the USC engineering school the Viterbi School of Engineering. Viterbi was elected to the National Academy of Engineering in 1978 and the National Academy of Sciences in 1996.

The Draper Prize was established in 1988 at the request of the Charles Stark Draper Laboratory Inc., Cambridge, Mass., to honor the memory of “Doc” Draper, the “father of inertial navigation,” and to increase public understanding of the contributions of engineering and technology. The prize is awarded annually.

Founded in 1964, the U.S. National Academy of Engineering is a private, independent, nonprofit institution that provides engineering leadership in service to the nation. Its mission is to advance the well-being of the nation by promoting a vibrant engineering profession and by marshalling the expertise and insights of eminent engineers to provide independent advice to the federal government on matters involving engineering and technology.