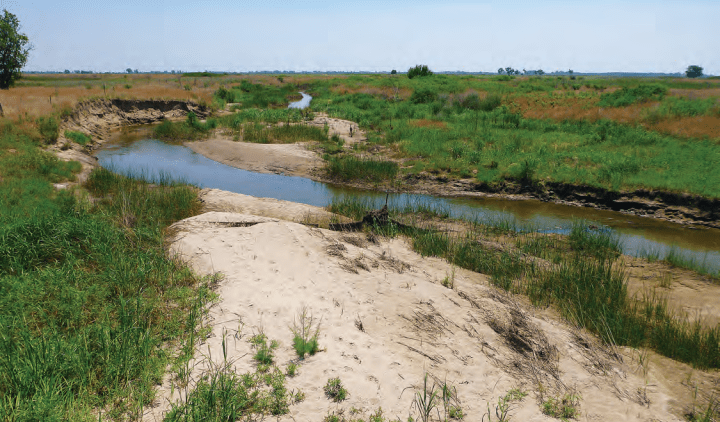 Streamflow in southwestern Kansas has decreased substantially since the 1950s, most likely due to groundwater withdrawals, according to a new U.S. Geological Survey study.

In some areas, groundwater levels have declined 50 to 150 feet or more since groundwater pumping began in the 1950s. Decreased streamflow may adversely affect the availability and quality of habitat needed by the Arkansas darter, a threatened fish species.

“This study is critical to the future management of habitat for the Arkansas darter and other aquatic organisms in that region of Kansas,” explains Vernon Tabor, a U.S. Fish and Wildlife Service biologist. “The study provides information that will be used to manage flows that are critical for the conservation of native aquatic species while factoring in the social and economic importance of groundwater in that area of Kansas and the Great Plains as a whole.”

Groundwater development is economically beneficial, but groundwater pumping can reduce the flow of water in connected streams and rivers. Pumping wells capture groundwater that would otherwise discharge to streams, rivers and other surface-water bodies.

“The most likely explanations for the reduced streamflows are decreased precipitation and water use,” said Kyle Juracek, a USGS scientist and author of the study. “There has not been a substantial decrease in annual precipitation since 1950, so groundwater pumping is likely the primary cause of decreased streamflow.”

To provide some of the information needed for the effective management of the threatened Arkansas darter habitats and populations in Kansas, the USGS, in cooperation with the U.S. Fish and Wildlife Service and the Kansas Department of Wildlife, Parks and Tourism, began a study in 2014 to assess streamflow at nine selected USGS streamgage sites.

Annual flows have not declined in other rivers, namely the Chikaskia, North and South Fork Ninnescah and Medicine Lodge. The areas drained by these rivers are much less affected by groundwater pumping

as confirmed by partner organizations. Groundwater data and decreases in water levels are available from a number of sources including the Kansas Geological Survey, Kansas Department of Agriculture, Division of Water Resources and local groundwater management districts.