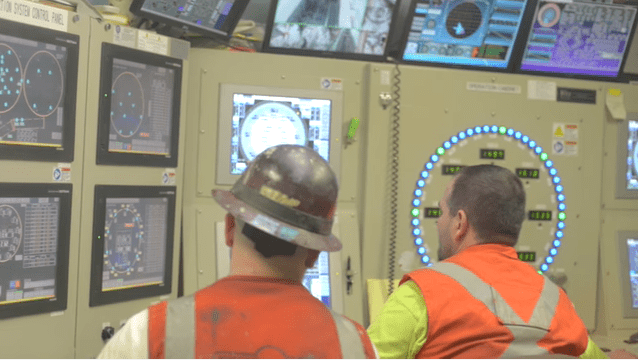 Bertha, the SR 99 tunneling machine, is now tunneling in Seattle soil after breaking through the access pit wall late Wednesday. Seattle Tunnel Partners has mined 73 feet and installed 12 concrete tunnel rings since Bertha first moved forward in the pit on Dec. 22. More mining is scheduled to occur this week.

Now approaching South Main Street, near Pier 48, Bertha is digging well below the area’s notorious fill soil. The top of the machine is approximately 80 feet below the surface in a mixture of glacially compacted material. Our Follow Berthapage has additional information about the conditions that Bertha will face over the remainder of the tunnel drive. Below is video of tunneling crews at work this week.

STP’s mining schedule
Currently, STP has two tunneling crews consisting of approximately 25 members each. Each crew is working six, 12-hour shifts per week. Mining progress during each shift may vary significantly from day to day. Some days crews may mine a long distance, while other days might be devoted exclusively to planned maintenance.<

According to STP’s most recent schedule (pdf 258 kb), Bertha is expected to reach a planned underground maintenance stop just south of Yesler Way in late January. Once there, crews will spend approximately three weeks performing final maintenance before the machine tunnels beneath the Alaskan Way Viaduct.

WSDOT will fully close SR 99 through downtown for approximately two weeks while the machine passes beneath the viaduct. STP’s latest projections show that the closure will occur in March, but the actual closure date will depend on Bertha’s progress and the state cannot verify the contractor’s schedule.