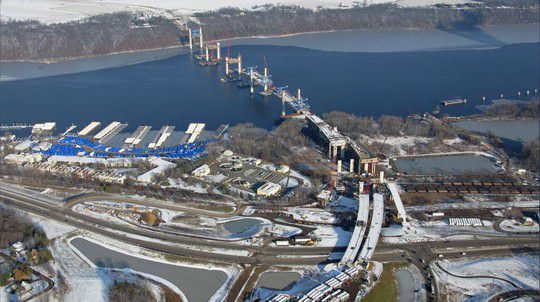 St. Paul, Minn., Jan. 6, 2016—The Minnesota and Wisconsin Departments of Transportation today announced that the St. Croix River Crossing project will be open to traffic by the fall of 2017. In September, MnDOT and WisDOT and the contractor for the project, Lunda/Ames Joint Venture, announced that the original completion date in 2016 was not attainable, and that a new completion date would be set by the end of 2015. The date was determined by analyzing work done to date, and work that remains.

“We believe this new date is well within the project team’s capability to meet,” said Michael Beer, MnDOT’s project director. “It is a large and complex project, and we want to be sure that it is done safely and meets our high standards for quality.”

MnDOT and WisDOT are committed to working with the Lunda/Ames Joint Venture to complete the St. Croix River Crossing project in the most efficient and cost-effective manner possible. The agencies at this time are not considering legal action against the contractor. At this point, working with the joint venture to resolve the schedule issue will save taxpayer money and reduce total project construction time.

The roadway portions of the project remain on track. Improvements to Highway 36 in Minnesota and Highway 64 in Wisconsin, which will connect to the bridge, are either complete or on-schedule.

About the Bridge Project Delays

Throughout the construction process, the St. Croix River Crossing project has faced a variety of challenges. More details are below.