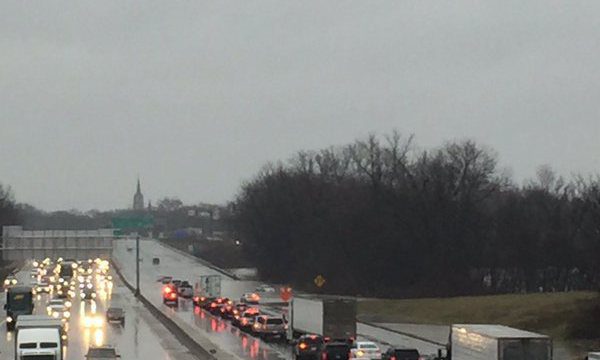 Flooding in central Missouri and Illinois is getting worse as the Mississippi River is rising quickly and is on pace to eclipse the Midwest flood of 1993, which saw more than 800 levees in Missouri breached. The storm is also having a broad impact on transportation infrastructure with two interstate highways closed — Interstate 44 near the Missouri town of Rolla and Interstate 70 in southern Illinois was shut down before being reopened Tuesday afternoon.

The Missouri DOT’s website reports 424 roads closed to flooding as of Wednesday morning. The Illinois DOT’s website indicates more than 25 road closures due to flooding, with most in District 8 in the southwest corner of the state.

Federal authorities are monitoring 19 vulnerable levees along the Mississippi River as it’s expected to reach nearly 15 feet above flood stage on Thursday at St. Louis. A levee was breached in West Alton, Mo., with calls for all 520 residents to evacuate. The tourist town of Branson, Mo. has also been hard hit with roads blocked into town and more than 200 families asked to evacuate.

The governor of Missouri has activated the National Guard to help divert traffic around the closed roadways and the governor of Illinois has declared disasters in seven counties.

Record flooding has already been recorded in the area, with the Bourbeuse River near the eastern Missouri town of Union reaching nearly 20 feet above flood stage.

The Metropolitan Sewer District of St. Louis’ Fenton wastewater treatment plant shut down on Monday, causing untreated sewage to go directly into nearby rivers and streams. One of two sewage treatment plants in Springfield, Mo. also failed due to the high water levels.

Resident in the region are strongly being urged not to drive as 12 of the people that have died were killed after their vehicles were swept from flooded roadways.