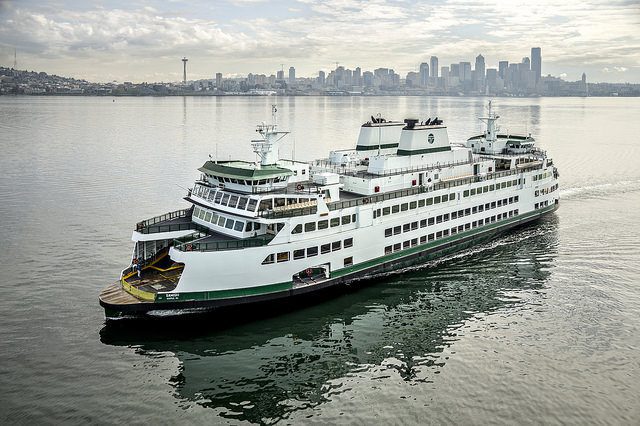 SEATTLE—Washington State Ferries is starting off the New Year with the construction of a new Olympic Class ferry. WSF signed a Notice to Proceed last week with shipbuilder Vigor Industrial for work on its fourth 144-vehicle ferry, and work begins in January. The new ferry is funded through the Connecting Washington transportation funding package.

Along with the Tokitae, Samish and Chimacum, the fourth Olympic Class ferry improves fleet reliability and safety by replacing four of the state’s oldest ferries built during the 1950s and 1960s.

“Our top priority is keeping the ferry system safe and reliable for the millions of commuters, freight haulers and travelers who depend on us every year,” said WSF Chief of Staff Elizabeth Kosa. “Thanks to state lawmakers and critical funds from Connecting Washington, we are able to meet some of the ferry system’s most urgent needs, including building this new ferry.”

The fourth ferry will be built at Vigor Industrial, supporting about 500 jobs at Vigor’s Seattle shipyard and contractors around the region. The budget to build the vessel is $122 million, and delivery is scheduled for mid-2018. The Washington State Transportation Commission is leading a public process to determine the fourth ferry’s name.

The first two Olympic Class ferries were delivered on time and under budget. The third vessel, under construction at Vigor, is on schedule, under budget and will be assigned to the Seattle/Bremerton route in early 2017.

At @autodesku , the learning never stops. Join the conversation and take your career to the next level.… https://t.co/vBnfjTQkRX
17 hours ago
@BentleySystems Issues Call for Nominations for the Year in Infrastructure 2020 Awards Program https://t.co/YUJ7GcJwTs #YII2020
18 hours ago
@awwa Meet the Water operators at the Annual Conference & Exposition (ACE) & be sure to express your gratitude for… https://t.co/zfSRFxUA8i
6 days ago
@Wipro Wipro and @SmartEnergyW (SEW) form global strategic alliance to accelerate #DigitalTransformation for enterp… https://t.co/UPeRBLc4Wa
2 weeks ago
DFI Educational Trust and @terraconlife Foundation Announce a New Scholarship Fund https://t.co/t18FBN7Kd9
2 weeks ago
@Transoft Solutions Acquires Canadian-based @BriskSynergies https://t.co/hceegJKx4q
3 weeks ago
Video: Interview with CEOs of @BentleySystems and Topcon Positioning Systems @topcon_today https://t.co/38rRQNbNcO
3 weeks ago
New @ASCETweets Publication Explores Engineering Designs for Precipitation Extremes https://t.co/2OX0kg9cOg
3 weeks ago
@HNTBCorp Americans pay an average of less than $25 a month to maintain the roadways and bridges essential to mob… https://t.co/T6mrVfdibT
4 weeks ago
Sdiptech lists: Trends – and challenges for the #infrastructure sector 2020 https://t.co/4cuswAcecV
1 month ago