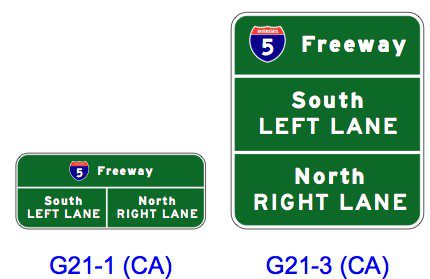 SACRAMENTO—Caltrans today announced the winners of its Innovation Contest, awarding a total of $25,000 to four individuals. Three first place winners will be awarded $7,000 each for their Advance Directional Sign suggestion to enhance safety and efficiency by using left and right markings on highway approach signs. The changes will provide earlier indication of what lanes motorists need to enter for desired routes. A second place winner was also awarded $4,000 for their idea to develop an online travel app concept to encourage smart travel habits.

The three first place winners, Mark H. Akin of Redwood Valley, Jordan Safine of Alamo and Ellen Atkins of Orange—were chosen from more than 600 eligible entries for their idea to have freeway signs indicate earlier which lane will lead to which freeway direction. By improving the advance information signs when approaching a freeway entrance and better indicating which lane—left or right—a motorist should be in, this idea can prevent last-minute lane changes, reducing gridlock, and make it easier for those unfamiliar with an area to plan ahead.

“Sometimes the simplest solution is the best solution, and that is the case with our winning idea,” said Caltrans Director Malcolm Dougherty. “We think this recommendation highlights the importance of Caltrans’ responsibility to assist motorists in safely navigating the complex system of highways and freeways throughout California.”

Caltrans will implement this idea by developing statewide maintenance guidelines to include clear indication of proper lane assignment at every freeway onramp (as demonstrated in the image mockups above). This effort will get a jump start to rapid deployment as Caltrans will incorporate it into the department’s current sign replacement effort to install highly reflective signs to enhance visibility and reduce electricity and maintenance costs. The cost of implementation is expected to be absorbable within the existing sign-replacement program.

Caltrans will also award $4,000 to second place winner Anita Weaver of Glendale for her entry, “Caltrans Freeway League,” (CFL) an online travel app concept that would encourage Californians to voluntarily monitor and modify their behavior to achieve safer and less congested commuting.

The CFL challenges Caltrans to develop an app in which participants score points for safe driving behavior, rewarding points when drivers shift travel modes, drive during off-peak hours or choose actions that align with department goals of safety and sustainability—a “fitbit” of sorts, but for commuting. The app would combine drivers’ shared responsibility with personal actions with the concept that Californians themselves can make transportation better.

Caltrans plans to explore partnerships with technology firms that are developing or that already provide travel-information apps. A data collection app such as the CFL would also provide valuable driver behavior and travel demand information so Caltrans can better target resources for reducing traffic congestion.

“Commuters increasingly rely on digital aids to get where they are going,” added Dougherty. “This idea fits well with that trend, with the added focus on safety and mode shift that will benefit all users of California’s transportation system.”

Caltrans, the Department of General Services and the California Department of Alcoholic Beverage Control each held a “$25K Find a New Way” innovation contest to improve government operations. The intent of the contest was to provide an opportunity for Californians to identify areas of improvement within state government, and share their untapped expertise to create solutions, for an opportunity to win up to $25,000.