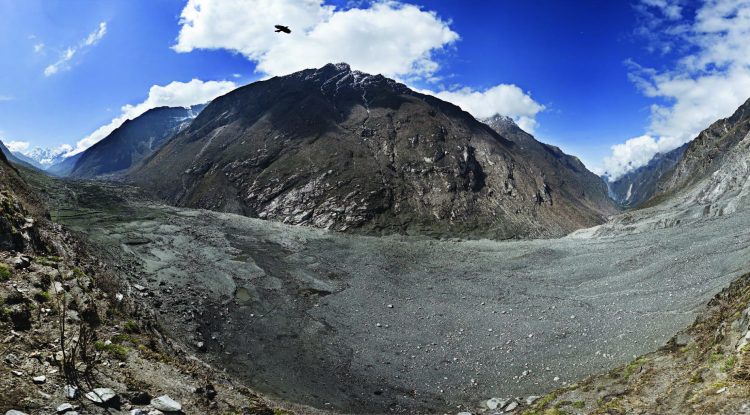 Fewer landslides resulted from the devastating April earthquake in Nepal than expected, reports a University of Arizona-led international team of scientists in the journal Science. The researchers hope insights from the study may improve understanding about landslides.

In addition, no large floods from overflowing glacial lakes occurred after the magnitude 7.8 quake, which struck near the town of Gorkha, Nepal, on April 25.

“It was a really bad earthquake — over 9,000 fatalities in four countries, primarily Nepal,” said lead author Jeffrey Kargel, senior associate research scientist in the UA Department of Hydrology and Water Resources. “As horrific as this was, the situation could have been far worse for an earthquake of this magnitude.”

When the earthquake struck, glaciologist Kargel considered how he could help from more than 8,000 miles away.

“For the first 24 hours after the quake, I was beside myself suffering for my friends and the country of Nepal that I so love,” he said. “I thought, what can I do? I’m sitting here in Tucson — how can I help Nepal?”

He realized his expertise in satellite imaging could help find out where landslides had happened, especially in remote mountain villages far from population centers.

He and UA geologist Gregory Leonard called on colleagues in the Global Land Ice Measurements from Space, or GLIMS, network that Kargel led to help identify affected areas by using satellite imagery. GLIMS, an international consortium of glaciologists, monitors glaciers all over the world. The GLIMS team’s initial efforts focused on possible earthquake effects on Himalayan glaciers, but quickly expanded to searching for post-earthquake landslides.

Use of Satellite Images

Within a day or two, Kargel, GLIMS scientists and others joined with the NASA Applied Sciences Disasters group to use remote sensing to help document damage and identify areas of need. The international group of scientists requested that several satellites take images of the region to enable the systematic mapping of landslides.

As a result of that request, government space agencies and commercial enterprises provided thousands of images. Kargel’s group selected which ones to analyze and organized into six teams to scrutinize the vast earthquake-affected region for landslides.

The scientists volunteered their time and worked long hours to analyze the images. Kargel said producing the landslide inventory was possible only because the network of volunteer analysts spanning nine nations had free access to such data.

More than 10 satellites from four countries provided images and other data so the volunteer analysts could map and report the various geological hazards, including landslides, that resulted from the earthquake. Computer models were used to evaluate the likelihood that the downstream edges of glacial lakes would collapse and flood villages and valleys below.

A range of groups, including international emergency response teams, received timely and relevant information about the post-earthquake geological hazards because of the rapid and open sharing of information among many different organizations.

About a month after the disaster, the International Centre for Integrated Mountain Development, or ICIMOD, used the scientists’ information to prepare a report and briefing for the Nepalese cabinet. As a result, the Nepal government increased support for a geohazard task force, which mobilized additional geologists to further assess current and future vulnerabilities.

The 4,312 landslides that happened within six weeks after the quake were far fewer than occurred after similar-magnitude quakes in other mountainous areas.

The team also surveyed 491 glacial lakes and saw only nine that were affected by landslides. Satellite images did not reveal any flooding from those lakes.

The team’s paper, “Geomorphic and Geologic Controls of Geohazards Induced by Nepal’s 2015 Gorkha Earthquake,” was scheduled for online publication by the journal Science today.

Kargel, Leonard, Dan Shugar of the University of Washington Tacoma, Umesh Haritashya of the University of Dayton in Ohio, Eric Fielding of NASA’s Jet Propulsion Laboratory, UA student Pratima KC and 58 other scientists, from more than 35 institutions in 12 countries, are co-authors on the research report.

NASA, the Hakai Institute, the Japan Aerospace Exploration Agency, DigitalGlobe, the Chinese Academy of Sciences and ICIMOD supported the research.

Although the initial research effort was purely humanitarian, the scientists eventually realized they had a huge database that could be analyzed to learn more about geohazards from this and other quakes.

In previous earthquakes in mountainous terrain, many earthquake-initiated landslides occurred from minutes to years after the initial quake. However, landslide susceptibility varies from quake to quake, the scientists wrote in their research paper.

To study the Gorkha quake landslides, the scientists used their satellite-based findings plus media reports, eyewitness photography and field assessments from helicopters. The researchers limited their analysis from the day of the earthquake to June 10, the onset of the monsoon.

In addition to identifying the locations and severity of landslides, the researchers found an unexpected pattern of where the landslides happened.

Co-author Fielding used satellite radar imagery to create a map of the terrain that dropped during the earthquake and where land surface had risen. The Earth’s surface dropped almost five feet (1.4 meters) in some places and rose as much as five feet (1.5 meters) in others.

By overlaying Fielding’s map with the landslide map, the scientists could see if there was any correspondence between the number of landslides and the Earth’s displacement.

That pattern was unexpected and hadn’t been observed before, Kargel said.

The research team is currently investigating why there were fewer landslides than expected and why they occurred where they did.

One possible explanation is that the Gorkha earthquake caused much less shaking at the surface than other earthquakes of similar magnitude.

Fielding said, “Seismologists recorded relatively less shaking with seismometers in Kathmandu and other locations, and the smaller number of landslides suggests the shaking may have been reduced in the whole area.”

“All kinds of Earth processes can cause a landslide,” Kargel said. “The Gorkha earthquake observations add to our understanding of landslides around the world.”

The main satellites used included WorldView 1, 2, and 3 from DigitalGlobe, Landsat 7 and 8 from NASA and USGS, Earth Observer-1 from NASA, ASTER onboard the Terra satellite from NASA and JAXA, Gaofen-1 from the China National Space Administration, RADARSAT-2 from the Canadian Space Agency and MDA, and ALOS-2 from JAXA.