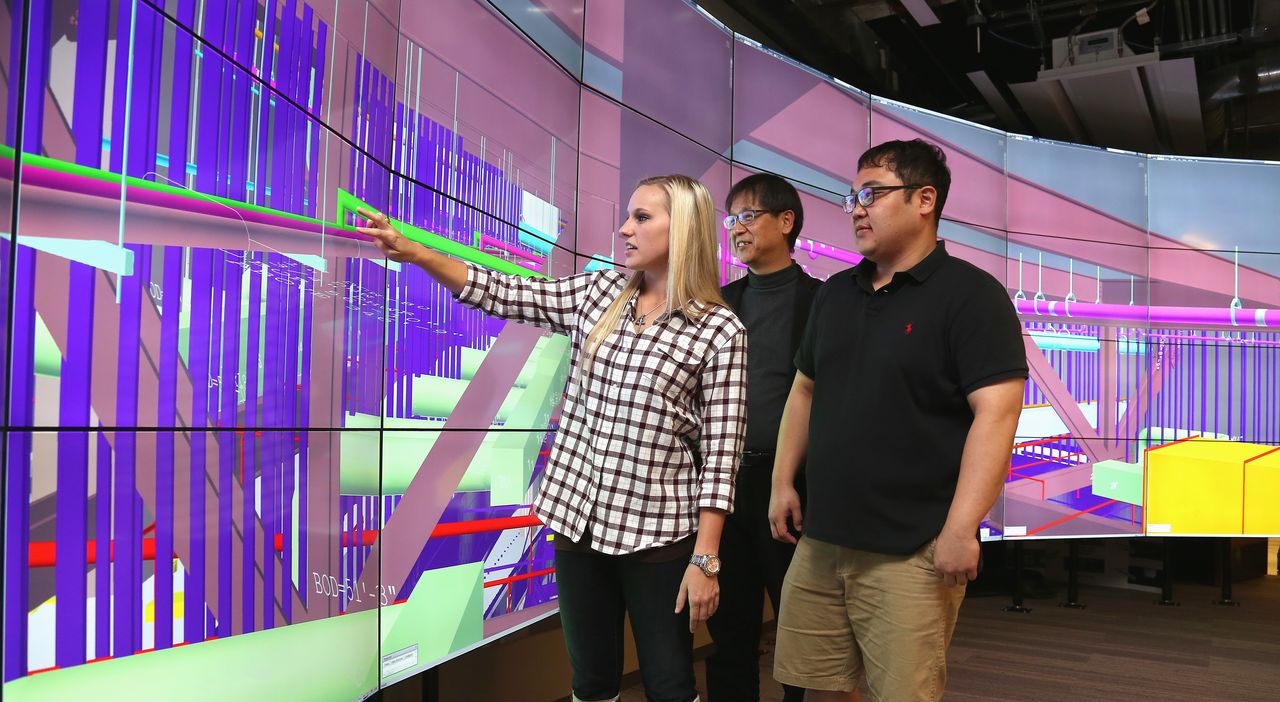 The 3-D renderings, created using BIM software, were showcased in Francis Hall’s new state-of-the-art computer-aided virtual environment, or BIM CAVE, which Joe Horlen, head of the Department of Construction Science, characterizes as “one of the finest facilities in the nation for viewing BIM models.”

“The BIM CAVE prepares the department’s graduates to excel in BIM positions at major construction companies across the nation,” said Horlen. “It ensures that our students will continue to acquire the highest level of knowledge and skill in this important area.”

The facility, continued Horlen, enables Texas A&M construction science students to become intimately familiar with the integral pieces of a building before any bolts are even put into the ground.

“With the CAVE, students are immersed in a structure instead of just looking at it on a screen or a 2-D drawing,” he said.

Each of the 36 monitors in the CAVE, built with the help of a $500,000 gift from Satterfield & Pontikes Construction, measures 46” diagonally. The CAVE’s rendering system uses nine computers to synchronize all of its monitors, enabling users to take a virtual stroll though a project and even go through its walls to inspect the structure’s mechanical, electrical and plumbing systems.

“It’s a learning experience that very few other universities can offer,” said Kang. “The 3-D image is so large it feels as if you’re actually inside the model.”

Builders are increasingly using BIM because of the many advantages it has over 2-D paper drawings, such as heightened collaboration among architects, builders, and engineers; early detection of costly “clashes” such as electrical conduits or air ducts that, due to design errors, occupy the same space as a ceiling beam; and many more.

In Kang’s class, students used Revit, a BIM application, to create 3-D models of buildings in the university’s East Quad, the lawn area surrounded by the Langford Architecture Center, Williams Administration Building and the Oceanography and Meteorology building.

They next imported their Revit models to NavisWorks, which allows users to navigate virtually through BIM models using the CAVE hardware.

To enable user-centered renderings of BIM images in the CAVE, Kang led a group of graduate architecture students in the development of a unique program to synchronize the images in the facility’s monitors. The program also enables users to quickly render models in NavisWorks or other applications.

The facility is the second iteration of BIM CAVE technology at Texas A&M. The first CAVE, unveiled in fall 2011, features 12 monitors and is still in use the Langford Architecture Center’s Building A.

In the Langford CAVE, students in a recent architecture history and theory class studied noted architect Lina Lo Bardi’s design of the Museum of Art in Sao Paulo by taking a BIM tour of the museum.