Climate the Main Cause of Increasing Streamflow in Eastern South Dakota 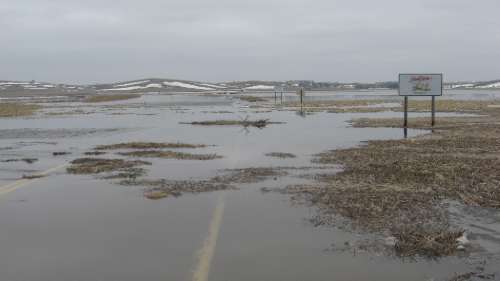 Increased precipitation is the primary cause of rising streamflow in many eastern South Dakota streams, according to a recent U.S. Geological Survey report.

Scientists with the USGS analyzed streamflow and precipitation trends from 1945 to 2013 for 10 South Dakota streamgages in the James, Big Sioux, Vermillion and Minnesota River basins. The study’s purpose was to determine whether annual streamflow is driven primarily by climatic or land-use changes. This information can help guide water management decisions in the region.

Results of the study showed that most of the streamgages in the James and Vermillion River basins had an upward trend in streamflow that could be explained by annual precipitation increases.

“For the streamgages in the Big Sioux and Minnesota River basins, land-use changes likely are minor factors in rising streamflow, with the main factors probably being changes in the timing and frequency of large precipitation events and persistently wetter preceding conditions,” said USGS hydrologist Galen Hoogestraat, the lead author of the report.

Of the 10 streamgages included in the study, only one site — the Elm River at Westport in the upper James River basin — did not have an upward trend in annual streamflow. The largest increase in streamflow was 30 cubic feet per second per year for the James River near Scotland during 1980 to 2013.

The importance of prior conditions was evident for all but one streamgage. Rising groundwater levels in eastern South Dakota, primarily since the 1980s, were also noted.

Upward trends in precipitation and streamflow have been observed in the northeastern Missouri River basin during the past century, including the area of eastern South Dakota. Some of the identified trends were anomalously large relative to surrounding parts of the northern Great Plains.