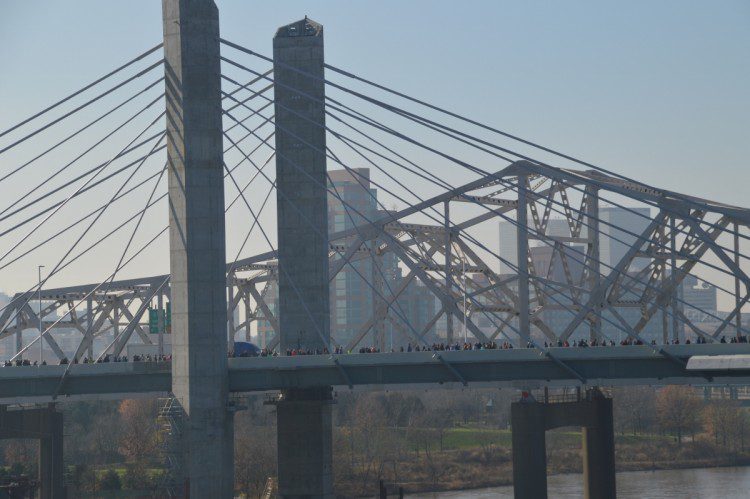 As southbound traffic shifted to the Lincoln Bridge, another long-term ramp closure began. The ramp from I-65 South to I-64 West has closed. It’s expected to reopen to traffic in late summer 2016.

Signed detours are in place. Drivers are likely to use I-265, I-264 and surface streets to reach I-64. During the closure, the current ramp will be demolished and a new ramp will be built.

There’s also a new, temporary alignment for drivers traveling from I-65 South to I-64 East/I-71 North. They have a later decision point, just east of Witherspoon Street. I-71 North traffic splits to the left.

Drivers need to slow down, avoid distractions and pay close attention to signage as they adjust to the traffic changes.

Now that I-65 South traffic has shifted to the Abraham Lincoln Bridge, all but one lane on the adjacent John F. Kennedy Bridge is closed. The single lane maintains access from I-65 South to I-64 East and I-71 North.

One lane on the Kennedy Bridge is expected to reopen late summer 2016 to restore access to I-64 West, I-64 East and I-71 North.

During the closure, a new floor system is being installed on the Kennedy Bridge. The $22 million in improvements are expected to add decades of new life to the 52-year old bridge.