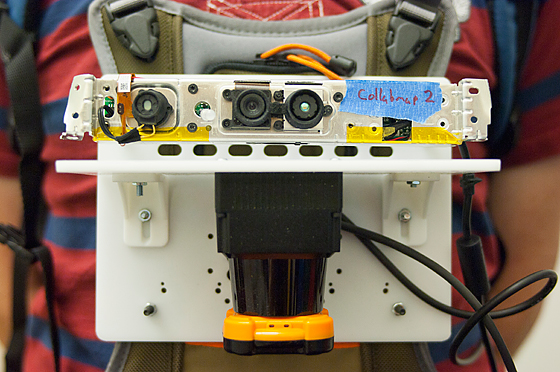 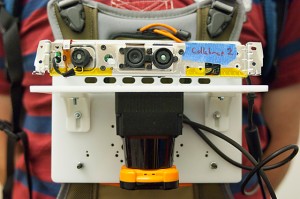 MIT researchers have built a wearable sensor system that automatically creates a digital map of the environment through which the wearer is moving. The prototype system, described in a paper slated for the Intelligent Robots and Systems conference in Portugal next month, is envisioned as a tool to help emergency responders coordinate disaster response.

In experiments conducted on the MIT campus, a graduate student wearing the sensor system wandered the halls, and the sensors wirelessly relayed data to a laptop in a distant conference room. Observers in the conference room were able to track the student’s progress on a map that sprang into being as he moved.

Connected to the array of sensors is a handheld pushbutton device that the wearer can use to annotate the map. In the prototype system, depressing the button simply designates a particular location as a point of interest. But the researchers envision that emergency responders could use a similar system to add voice or text tags to the map — indicating, say, structural damage or a toxic spill.

The new work builds on previous research on systems that enable robots to map their environments. But adapting the system so that a human could wear it required a number of modifications.

One of the sensors that the system uses is a laser rangefinder, which sweeps a laser beam around a 270-degree arc and measures the time that it takes the light pulses to return. If the rangefinder is level, it can provide very accurate information about the distance of the nearest walls, but a walking human jostles it much more than a rolling robot does. Similarly, sensors in a robot’s wheels can provide accurate information about its physical orientation and the distances it covers, but that’s missing with humans. And as emergency workers responding to a disaster might have to move among several floors of a building, the system also has to recognize changes in altitude, so it doesn’t inadvertently overlay the map of one floor with information about a different one.

So in addition to the rangefinder, the researchers also equipped their sensor platform with a cluster of accelerometers and gyroscopes, a camera, and, in one group of experiments, a barometer (changes in air pressure proved to be a surprisingly good indicator of floor transitions). The gyroscopes could infer when the rangefinder was tilted — information the mapping algorithms could use in interpreting its readings — and the accelerometers provided some information about the wearer’s velocity and very good information about changes in altitude.

Adjudicating the data from all the other sensors is the camera. Every few meters, the camera takes a snapshot of its surroundings, and software extracts a couple of hundred visual features from the image — particular patterns of color, or contours, or inferred three-dimensional shapes. Each batch of features is associated with a particular location on the map.

The prototype of the sensor platform consists of a handful of devices attached to a sheet of hard plastic about the size of an iPad, which is worn on the chest like a backward backpack. The only sensor whose volume can’t be reduced significantly is the rangefinder, so in principle, the whole system could be shrunk to about the size of a coffee mug.

Wolfram Burgard, a professor of computer science at the University of Freiburg in Germany, says that the MIT researchers’ work is on the general topic of SLAM, or simultaneous localization and mapping. “Originally, this came out as a problem of robotics,” Burgard says. “This idea of having a SLAM system that is attached to a human’s body, for figuring out where it is, is actually innovative and pretty useful. For first responders, a technology like this one might be highly relevant.”

“With a robot, we typically assume that the robot lives in a plane,” Burgard continues. “What they definitely tackled is the problem of height and dealing with staircases, as the human walks up and down. The sensors are not always straight, because the body shakes. These are problems that they tackle in their approach, and where it actually goes beyond the standard 2-D SLAM.”

Both the U.S. Air Force and the Office of Naval Research supported the work.