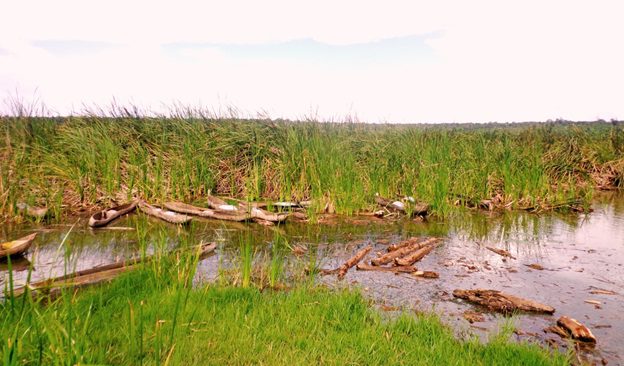 KIGALI, Rwanda, Dec. 15, 2015—Rwanda is implementing an ambitious program to bring back its lakes that have been disappearing for decades – especially in the previously drought-stricken south eastern region of the country.

Fifteen years ago, farmers from Bugesera district had planted seeds, but months elapsed without a drop of rain.

All marshlands dried up and Lake Cyohoha, one of the most productive among the nine lakes of the region, was reduced to a small trough. Farmers relocated to other regions after losing their cassava, rice, vegetables and other cultivations.

“The district was a victim of human activities; Bugesera had immense forests until 1970s, but its forests were over exploited for charcoal, which reduced rain water,” says Charles Sindayigaya, an environmentalist from Rwanda Environment Management Authority.

By April 2002, it started raining again in Bugesera, marking a new beginning for farmers.

Between 2007 and 2008, although lakes began reviving, water hyacinth weed grew so fast, it created a new threat to fish survival.

In 2013, the government decided to hire roughly 1000 villagers, including fishermen and their families, to clear the weed from the lake.

“At first we feared snakes and other wild animals, but we ended up taking the offer because our lake was precious,” said Emmanuel Nzigira, a fisherman.

So far 140 hectares out of 600 hectares of the weed cover have been cleared within two years.

Safeguarding the environment has become a national priority. Citizens contribute through voluntary works, Umuganda. The government has also started a fund to support organizations involved in environmental conservation.

Meanwhile, as the world met in Paris for COP21, to push for more conservation efforts, millions of Rwandans, were busy planting 30 million trees, an exercise that took just six hours.