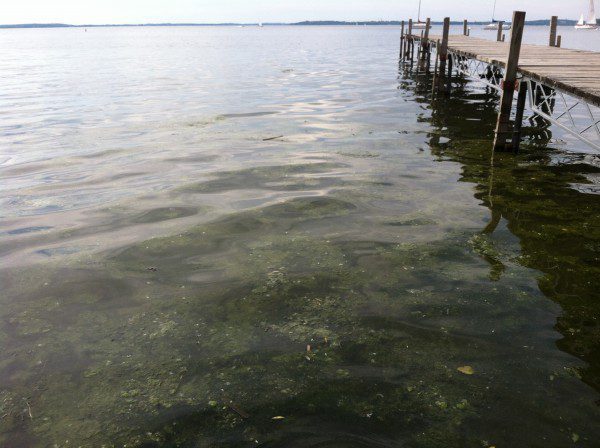 Rapid predictions of harmful algal blooms, or large growths of toxin-producing bacteria in water, can help prevent recreationalists from getting sick at Ohio lakes, according to a new U.S. Geological Survey report.

Scientists with the USGS and partners made real-time water-quality and environmental measurements at seven recreational areas in Ohio during 2013‒2014. Their goal was to identify factors that could be used in models to quickly predict microcystin levels and provide advisories to swimmers and boaters. Microcystin is the most commonly detected toxin found in freshwater algal blooms. Models are used successfully at Lake Erie beaches as part of the Ohio Nowcast for predicting E. coli concentrations, but have not been tested for algal bloom predictions.

“Algal bloom toxins in water are currently measured in the laboratory, and results take time,” said Donna Francy, the lead USGS scientist for the study. “Utilizing nowcasts to determine when and where a bloom may occur in real-time can better protect people like swimmers and boaters that use and consume water resources.”

These toxic blooms, which sometimes turn water a green or a blue-green color, can be irritating to skin and may affect the human liver and nervous system if consumed. The bacteria that cause algal blooms are cyanobacteria. A cyanobacterial harmful algal bloom, or cyanoHAB, occurs when water conditions like excess nutrients, sunlight, warm temperatures and water levels favor growth of toxin-producing cyanobacteria over other aquatic organisms.

“The Ohio Nowcast system for E. coli, operating since 2006, is similar to a weather forecast except that current water-quality conditions instead of future conditions are estimated,” said Francy. “Since a nowcast has worked for E. coli, we decided to try to develop one for cyanoHABs and their associated toxins.”

The scientists collected weekly to monthly data for two recreational seasons and identified factors that could be used to predict microcystin concentrations at a variety of freshwater sites. Measurements of a pigment called phycocyanin, water clarity, water pH, streamflow from a nearby river and lake level changes over 24 hours were among the best factors to estimate microcystin levels in real-time. Future studies will focus on collecting more frequent data to develop site-specific models to use in cyanoHAB nowcasts.

A full list of cooperators on the Ohio cyanoHAB nowcast project is available in the USGS report.